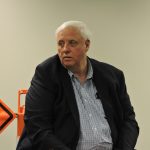 Photo by Alan Olson Gov. Jim Justice speaks before a crowd of local representatives in Moundsville on Wednesday.

MOUNDSVILLE — Gov. Jim Justice kept his promise to residents of Marshall County, returning Wednesday to hear an update on road work in the community.

The governor had been in Moundsville last month after Marshall County commissioners declared a state of emergency over the condition of the county’s roads. At that time he said he would return every 45 days for an update, and on Wednesday, he made his first return trip.

Local representatives from Marshall County as well as the House of Delegates were on hand to greet Justice, who was joined by recently appointed Secretary of Transportation Byrd White and Highways Commissioner Jimmy Wriston. The small crowd of a few dozen gathered at the District 6 Division of Highways office in Moundsville.

Delegate Joe Canestraro, D-Marshall, pointed out that contractors have been out in force, already paving hundreds of miles of road within the county and beginning work on digging culverts.

“This meeting was successful because he kept his word,” Canestraro said.

“He came back and outlined the work that’s been done.”

During the meeting, Canestraro asked Justice how funding for the counties was divided; the Northern Panhandle received around $287,500,000 through the Roads to Prosperity project, around 8 percent of the statewide total. Of that amount, Marshall County received about 20 percent of the funds, receiving $56.7 million. Ohio County received $196.6 million.

Justice said that allocations varied depending on the scope of the work required, and that down the line, hopefully more funding will find its way to Marshall County.

“If I ask you how many cows are in a field, just count the egg-sucking cows,” Justice said. “Don’t count the legs and divide by four. … There’s no bias. The panhandle doesn’t have more bias at the Highway Department. If we still have a critical situation, like you all have, hopefully those numbers will skew your way.”

Justice said a critical part of the project was getting oil and gas companies to contribute to funding the road repairs, as their trucks and equipment are, in part, why many roads in rural areas are failing.

“We have to address the concerns and get some real participation from the gas companies,” he said. “We don’t need anything unfair, don’t need to lean on them because they’ve got money. But common sense tells us they’re tearing the roads up, and there’s just not enough of the king’s helpers to do everything.”

White said state officials have found some success in getting companies to cooperate.

“A lot of gas companies are interested,” he said. “They want to fix the roads. They don’t want to tear up the roads and just leave. They’re driving on them, too. They’re helping us a lot.”

Delegate Lisa Zukoff, D-Marshall, pointed out that the roads issue is a non-partisan one, and that at a governmental level, Republicans and Democrats must work together to make real change happen. She asked Justice to sit down with delegates and senators, along with oil and gas company representatives, and try to get a non-political dialogue going.

“We tried to pass some bills last legislative session, and we weren’t successful in passing them through,” Zukoff said.

Justice said he would work to make talks happen across the aisle and with the companies, though he said in his previous experience, doing so was difficult.

“Everyone needs to be in trying to help,” he said. “It’s almost like a can of nightcrawlers. Once I get two or three in the can, I turn around and they’re all out of the can going different directions. I just can’t get us anywhere. I’ll keep trying to figure it out.”

Justice went on to say that he viewed the process of repairing the state’s roads as a huge undertaking, and a challenge he relishes.

“We can win this thing — but it’s a big deal. Just bear with us, we’re going to get there.”