Wheeling Feeling Chili Cook-Off Will Have Youthful Flavor This Year 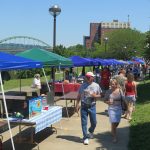 WHEELING — With the city’s 18th annual chili cook-off set to turn up the heat next month, organizers are hoping that children in the area get the “Wheeling Feeling” as well this year.

The Wheeling Feeling Chili Cook-Off, scheduled for noon to 6 p.m. June 1 at Heritage Port, now includes a youth division on top of its other competitions, event chairwoman Rosemary Humway-Warmuth said.

“It’s an outdoor event, it gets kids doing something a little different, with the ability for them to get into cooking, farmers markets, using good ingredients,” Humway-Warmuth, city solicitor, said. “If you have a kid in the area that’s even remotely interested in it, this is a great opportunity for them.”

The day-long, city-sponsored competition is open to the public, and attendees can purchase sample cups of chili as well as drinks, other food and Wheeling Feeling t-shirts. All proceeds from the event benefit the United Way of the Upper Ohio Valley.

“The whole place, we set it up, it starts smelling like chili from 9 a.m. and goes on until about six,” Humway-Warmuth said.

The event, an official competition sanctioned by the International Chili Society, features different categories for types of chili with nearly $5,000 in prize money to be awarded. Categories include traditional red chili, homestyle chili, chili verde and veggie chili.

Winners at this year’s cook-off will then get to compete in September at the World Championship Chili Cook-Off in Des Moines, Iowa, Humway-Warmuth noted.

Both restaurants and individuals will try their hand at cooking batches of chili in separate divisions. The event also includes a newly-added youth division, open to kids aged six to 17 for homestyle chili.

“We’re urging any young student or child that seems to have an aptitude or desire for cooking to think about joining,” Humway-Warmuth said. “They might win, and they’re certainly going to learn some skills and probably have a good time.”

Kids who compete will have to cook the chili themselves but are allowed to have parental supervision, as parents can act as sous-chefs, she said.

Participants, including kids, may even be able to pick up some chili-making pointers from the chili veterans at the event, attended by several world champions, she noted. Youth division winners will be able to compete at the world cook-off as well.

“That’s what we’re hoping for, to get some young folks excited about learning about using fresh and good ingredients and to whip up a good batch of chili,” Humway-Warmuth said.

Those interested in competing will have to register with the city and sign up to become a member of the International Chili Society at chilicookoff.com. The city will waive the member fee for first-time participants.

Humway-Warmuth said the main goal of the event is to raise money for the United Way. Last year, the cook-off raised $10,000 and reached a total of $100,000 raised since the event first started, she said.

The cook-off will provide furnished tents, tables and chairs for competitors, who will have to bring their own camp stoves, cookware and ingredients. Volunteers will also be on hand to help out.

The event will host more than 50 returning judges, including chief judge Brian Warmuth, known as the “head chili” and also Humway-Warmuth’s husband.

In addition, the event will feature a classic car cruise and two bands who will play throughout the day.

Humway-Warmuth thanked city staff, volunteers and the United Way for help setting up, running and tearing down the cook-off each year.