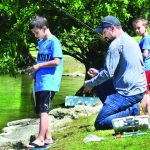 WHEELING — Quality time and traditional values were on display at a local sandlot and area park in the days leading up to this Father’s Day weekend.

Whether it was at Dimmeydale ballfield or the shoreline at Schenk Lake in Oglebay Park, several fathers took advantage of the warm and sunny weather conditions over the past few days to spend quality time with their children and pass along the traditional values they learned from their dads.

Donnie Castello of Wheeling, who is an assistant coach for the Woodsdale Blue girls softball team, said he plans to pass on the same core values to both of his children that his father taught him growing up. Being a Wheeling firefighter, Castello said his occupation typically will pull him away from his family for one or two days at a time, so spending that quality time with family means everything to him.

“Ever since I was little playing sports and he coached me through baseball, he taught me to be respectful of other people and to play well with others,” Castello said of the advice his dad offered him as his 11-year-old daughter, Kaelin, carried baseball gear along side of him to the ballfield dugout. He said he taught him, “your word is your word — don’t fall back on your word.”

“He always taught me how to be an upstanding man and take care of your family,” he added.

As one of his daughter’s coaches, Castello said he expects the same effort out of her as every other player on the team.

“If I yell at her on the field, it means nothing, they all get treated the same. … She doesn’t catch a break. she leaves more upset than anybody on the field,” Castello explained.

He said she knows to be respectful of all the other players on the field and all the adults.

“So she is learning,” he added.

Castello said he hopes to coach his 2-year-old son, Dominic, in baseball one day and continue the family tradition of coaching his children while instilling family values.

Waiting to watch his 9-year-old daughter, Kenli, play for the Pike Red girls softball game, Michael Richey of Wheeling, said it is the hard “work ethic” his father taught him while working on the family’s West Alexander farm while growing up are the same values he hopes to pass along to his children.

“Being on the farm and helping him work on his tractor,” Richey said is one of many fond memories he has about growing up, while sitting with his 7-year-old son, Trindon. Working on the tractor, stacking hay bales, or helping with the livestock, are just a few of the many farm duties where Richey learned about a hard work ethic from his father.

He said he loves spending time with his children.

While fishing with his two sons, 9-year-old Sean Jr. and 7-year-old Jackson, Sean Fahey of Wheeling, echoed those comments, saying how he hopes to instill the same important life lessons that his dad taught him growing up and the importance of spending quality time together.

“They are at the age now where they can start being a little responsible for themselves, and this kind of gives them patience,” Fahey said, while showing them how to cast a line in Schenk Lake.

While visiting Oglebay Park for a family reunion with his wife’s family, Adam Brennan of Gastonia, North Carolina, a father of four, took time to bicycle with his son 11-year-old son, Caleb, around the rolling hills of Oglebay Park Friday. Brennen said he hopes to pass along some traditional family values to his children, that his dad taught, like teaching them about being “respectful” of others.

“We like to go bike riding, we go hiking, we love to go to the parks,” Brennan explained about spending quality time with his family this Father’s Day weekend.