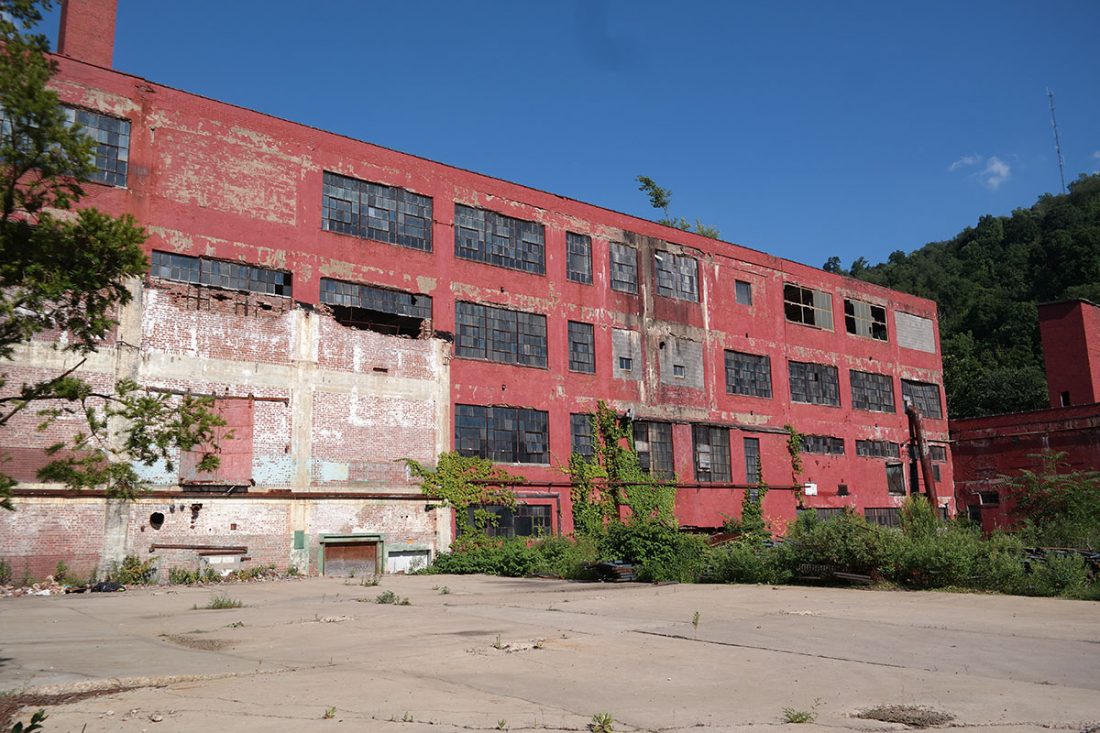 A warehouse at 19th and Jacob Streets in East Wheeling sits vacant Monday afternoon. City Council may consider constructing a $14.5 million public safety building at the site at the recommendation of city staff.

WHEELING — The site of a vacant warehouse in East Wheeling may eventually house the city’s police and fire departments if City Council moves forward with a new proposal for a $14.5 million facility.

At a meeting of Council’s Public Safety Committee on Monday, City Manager Robert Herron presented city staff’s recommendation to construct a public safety building at a property at 19th and Jacob Streets.

The plan presented to council involves purchasing the property, demolishing the existing warehouse, conducting remediation and building a one-story, 52,000-square-foot public safety building on the land. Building construction would cost $12.5 million, and the overall cost of the project would be about $14.5 million, Herron said.

“I’m encouraged by the idea and I want to thank everyone for their work in putting this together,” Mayor Glenn Elliott said. “The need for the public safety building didn’t go away once that vote failed. It’s a great testament to the work of this council and city staff to keep looking at other ideas.”

Wheeling previously considered a $22 million plan to construct a public safety building at 10th and Market Streets last year. That plan hit a roadblock when a tax levy for the project received 54 percent of the 60 percent of votes needed to pass in last November’s election.

City staff then went “back to the drawing board,” Elliott said, and began considering other sites earlier this year at the suggestion of Councilman Dave Palmer.

“We decided to look at other options. People said, why do you have to build it there, why’s it got to look like that, why’s it got to cost so much,” Palmer said. “We went back and tried to answer some of those questions. We tried to identify different sites, what would work and what wouldn’t work.”

The city considered many different sites, but three became obvious contenders based on location, geography and size, said Craig O’Leary, a consultant with the Regional Economic Development Partnership who aided the city on the project.

Other options included using the original 10th and Market Street property as well as rehabilitating the HRC Building at 11th and Chapline Streets, Herron said. That rehabilitation would cost $13.9 million.

However, “serious logistical issues” at the HRC Building property would make it difficult to house the fire department there due to elevation problems and its Chapline Street location for entering and exiting, he said.

Herron said city staff recommend that council move forward with the East Wheeling site for a public safety building, which would represent a savings of about $5 million compared to the $19.6 million cost of construction at the 10th and Market site.

After holding discussion among council members, the committee — which consists of Palmer, Councilwoman Melinda Koslik and Councilman Ken Imer — unanimously voted to forward the proposal to City Council.

Next, if council authorizes the design of the project in September, construction on the building could begin in June or July of 2020, Herron said. Demolition and remediation would occur during the design process.

The property, located at 58 19th Street, is owned by Americo Inc., which is in turn owned by Wheeling resident Frank Calabrese. Calabrese said if the city purchases the building from him, he would use the money for his foundation, Imagine Just Peace, to give back to the community.

“This site was not my first choice at all, but as I’ve looked at it really grows on me. I think it really eliminates blight,” Elliott said. “It’s a gateway to Wheeling, and it’s not the best gateway right now. Eliminating that building with something that serves such a high public service is something I’m really excited about and it’s going to save us money.”

Calabrese said the 3-acre property presents a number of advantages, including an abundance of parking on and around the property and its location.

“It’s less than a mile from Interstate 70, and if there’s an emergency that’s important,” said Calabrese, also chairman of Wheeling’s Human Rights Commission. “It’s only two blocks away from (W.Va. 2), and that’s important.”

The building would include separate areas for the police department and the fire department, as well as common areas such as training and conference rooms, Herron said. The new plan decreased the size of some areas outlined in the original 10th and Market Plan, such as lobby space, to reduce costs, he said.

In addition, if the public safety building is built, Fire Station 2 at 801 Main St. would remain open, Herron said. The original plan involved consolidating the North Wheeling station with the 10th and Market Street building.

Officials didn’t talk about how the city would pay for the $14.5 million project at Monday’s meeting. Previously, officials have discussed enacting a user fee, a weekly tax on those who work in Wheeling, to fund a public safety building.

Councilwoman Wendy Scatterday confirmed with Herron that the city is in the early stages of the planned project and that design details still need to be figured out.

“It’s fair to say right now that this is very, very preliminary,” Scatterday said. “We’re trying to pursue this in a very intentional way.”

Herron said once City Council decides to move forward on the project and the site, the city would then would present a contract to conuncil with an architecture and engineering firm for design work.

“It appears from discussion that the 19th Street site would be the logical choice,” Palmer said at the close of the meeting.