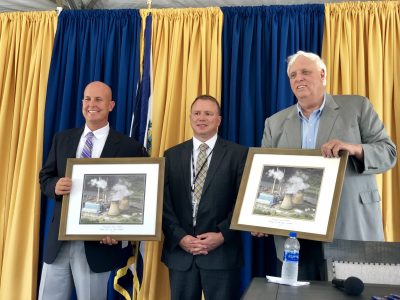 WILLOW ISLAND — A multi-million-dollar tax break aimed at giving Pleasants Power Station a new jolt of energy was signed Tuesday by Gov. Jim Justice beneath the shadow of the plant’s smokestacks.

House Bill 207, passed by the West Virginia Legislature July 23 after being added to the special session call by Justice, gives FirstEnergy Solutions a $12.5 million annual break on business and occupation taxes to the state.

“I congratulate you. You should be the most proud, but you can’t possibly be any more proud than I am,” Justice said to a packed tent full of plant workers, company officials, community leaders, and lawmakers.

Pleasants Power is one of two coal-fired merchant power stations in the state — stations that sell their electric on the wholesale market. The other merchant station, Longview Power Station in Monongalia County, has a payment-in-lieu-of-taxes deal with the county that exempts it from business and occupation taxes. The other six coal-fired power plants in the state pass their business and occupation tax costs on to ratepayers.

Jason Roberts, a maintenance supervisor at the Pleasants Power Station, said that if Pleasants Power closed, it would have a trickle-down effect on jobs across the state.

“The overwhelming support of this bill coming from the (United Mine Workers of America), the workers that dig the coal, the union traders were backing us big. And we support them. It doesn’t just affect our employees here; it affects everyone outside also.”

FES planned to close Pleasants Power in December 2018, but two months prior the company pushed back the deactivation date to May 2022. Company officials have said the business and occupation tax break should help keep the plant open past 2022.

“I can’t imagine anything more important than saving the Pleasants Power Plant, saving the 160 jobs that work directly here, the additional 400-plus jobs that are here every time we have an outage, and all the jobs related to the West Virginia coal we burn here at this plant,” Judge said.

HB 207 came about after FES officials and Pleasants County Commission President Jay Powell approached the Justice administration about getting rid of the business and occupation tax for the plant. After meetings July 15 with the governor’s staff and legislative leadership, the bill was added to the special session call. Powell said he was thankful Justice and lawmakers listened to the people of the county instead of outside environmental interests.

“We have a governor and we have legislators that could have easily listened to what everyone else was saying,” Powell said. “It’s no secret the war on coal. It’s no secret in Pleasants County about the war on this power plant. Thank the good Lord above the West Virginia Legislature and Governor Justice didn’t listen to those voices.”

Officials hope the tax break, combined with subsidies passed by the Ohio statehouse for coal and nuclear power plants owned by FES, will make the company more attractive when it participates in the capacity auction held by PJM Interconnection, a wholesale electric transmission company that serves 13 states and more than 65 million customers.

That auction, first scheduled for May and rescheduled for August, is on indefinite hiatus while the Federal Energy Regulatory Commission works with PJM on new rules and tariffs for the auction. Judge said the auction’s delay will not negatively affect the power plant.

“Long-term it has no impact on the Pleasants Power Plant,” Judge said. “That auction will eventually be held once FERC and PJM get their issues cleared up. We need to be ready to offer this plant into that auction, because it’s part of the revenue that’s important to this plant.”