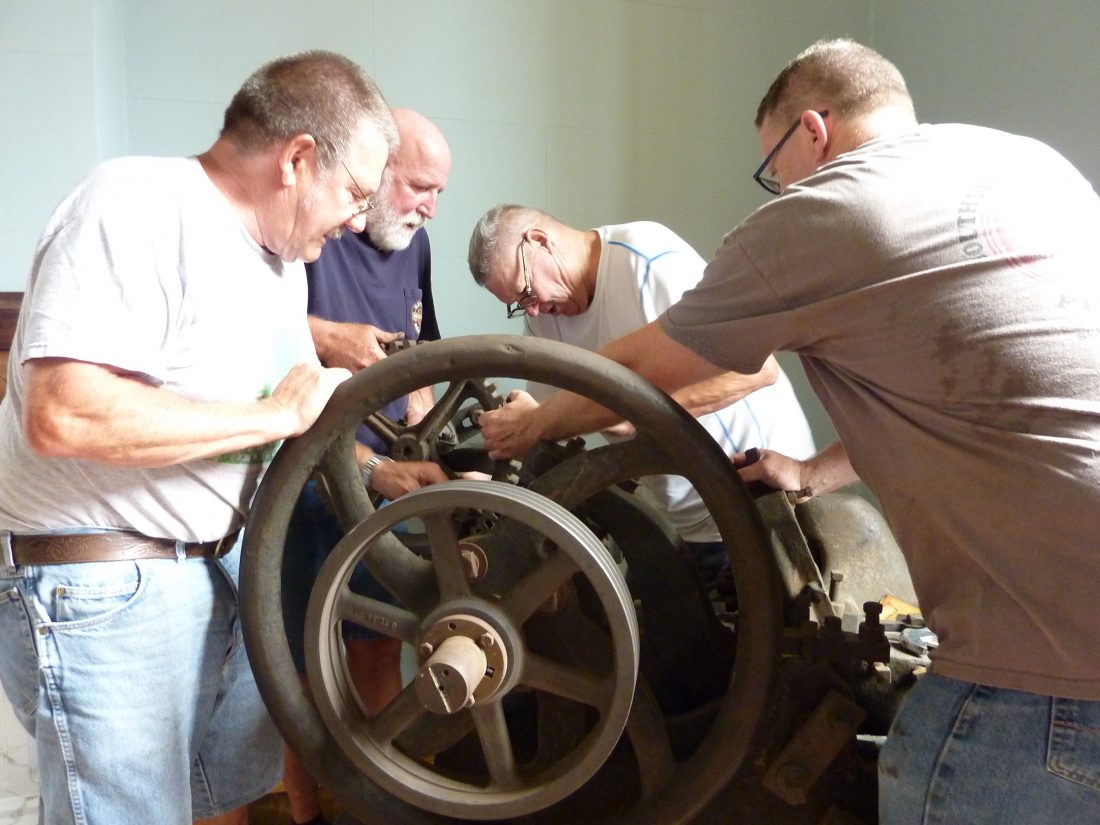 WHEELING — An old nail-making machine from the historic LaBelle Nail Factory has a new home at West Virginia Independence Hall.

With help from LaBelle retirees, the vintage machine was taken apart and reassembled last week for permanent display on the second floor of the state’s birthplace.

The equipment — possibly original to the former plant — now serves as the centerpiece of an exhibit room dedicated to interpreting Wheeling’s past role as a boom town for manufacturing.

After the former factory closed, one of its nail-making machines was promised to West Virginia Independence Hall. It was stored at Wheeling Heritage’s site until hall officials had the exhibit room readied for the display.

Moving the heavy equipment, piece by piece, was quite an undertaking. The machine and its metal base have a combined weight of a ton.

It took eight or nine trips to move all the pieces from the Wheeling Artisan Center to the hall Tuesday.

Debbie Jones, the hall’s site manager, said a window had to be removed temporarily so that a large section could be hoisted by a crane into the second-floor room.

Three former LaBelle employees — who had many years of experience in working on the nail-makers — were recruited for the task of putting the machine back together.

Called back into service were Wheeling resident Jerry Hickman, who worked at LaBelle from 1973 until the factory’s closure in 2010; Moundsville resident Terry “Moose” Moore, who transferred to LaBelle in 1981 and remained there until he retired in 2001; and Wheeling resident Jim Baller, who was employed at the factory from 1986 until his retirement in 2000.

“It’s been quite a process,” Henline said. “There’s no way we could have done this without these guys.”

Observing the men as they determined the order for reinstalling the pieces, he quipped, “It came apart a lot easier.”

The iron base weighs 1,000 pounds, while the machine itself adds another 1,000 pounds to the total weight, Henline said. The LaBelle retirees estimated that the unit’s wheel alone weighs 350-400 pounds.

For the veteran employees, the process of reassembling the machine reminded them of the routine maintenance that was undertaken on the factory floor.

“This was an everyday occurrence at the nail factory for 150 years,” Moore said.

The LaBelle Nail Factory opened in 1852 in South Wheeling.

“This machine may have been one of the originals, who knows?” Moore added.

Hickman, who spent 38 years at the factory, said his father worked at LaBelle for 42 years.

Working for LaBelle was a family affair for many employees, the retirees agreed.

“There’s a lot of fathers and sons and grandsons,” Hickman said.

Moore was employed for 37 years with the Wheeling-Pittsburgh Steel Corp. and its subsidiaries, including LaBelle. He worked at the Wheeling Corrugating plants in East Wheeling and Beech Bottom before joining the ranks at the nail factory.

Baller worked for Wheeling-Pittsburgh Steel for a total of 30 years. He joined LaBelle after the steelmaker’s Benwood mill closed.

“It was a good place to work. It was like family,” Hickman said,

But it took a special kind of employee — one with strength and stamina — to handle the strenuous tasks required at the nail factory. Once, when the plant had eight job openings, 167 men tried it before officials found “eight good guys” willing to take on the task, Hickman recalled.

As a test of their ability, prospective employees had to push a 1,000-pound load uphill and then downhill.

“After five minutes, a lot of guys would take off their gloves and say, ‘I’m out of here,'” Hickman said, adding, “It was a tough place to work.”

Hickman’s father’s first job at the factory was being a night watchman; his duties included feeding the furnaces and the donkeys that pulled heavy loads in the plant. After the last two donkeys died in the 1960s, they were replaced “with two-legged guys,” Hickman said.

Donkeys pulled loads, containing100-pound kegs of nails, from the factory floor to the shipping department. “When it was break time, that donkey would stop until you fed him,” Hickman said.

The factory, which was the city’s leading nail producer, used “19th-century technology well into the 20th century,” Wheeling historian Bekah Karelis said. Until the company’s closure in 2010, cut nails were still being made with virtually the same machinery as in 1852, she added.

With Wheeling known as the “nail city” by 1875, LaBelle became a nationally significant company, producing 25 percent of all nails made in the United States.

In 2015, when much of LaBelle’s interior equipment was up for auction, Wheeling Heritage representatives wanted to save as much of the factory’s industrial history as possible. Wheeling Heritage, the only bidder, bought the entire paper records in the office building for $5.

At the final auction, many machines and equipment were sold for scrap, but museums bought some of the machines, Karelis said. Henline, who also is a former WVIH site manager, said Wheeling Heritage has nine other LaBelle nail machines in storage.

LaBelle’s cannon, “Old Garibaldi,” now rests on the lawn of West Virginia Independence Hall. The cannon, which was made at the nail plant, was fired to celebrate the end of the Civil War in April 1865 and later was fired to mark the conclusion of other wars.