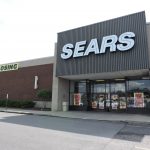 Sears at the Ohio Valley Mall in St. Clairsville closed its doors for good on Sunday.

ST. CLAIRSVILLE — The long-established department store Sears closed its doors for the last time after more than 40 years in business at the Ohio Valley Mall.

Closing and sale signs coated the outer doors of the now almost vacant store alerting shoppers about the imminent closing in the final week, before the final business day on Sunday.

Many longtime Sears customers made their final stops at the department store.

On Wednesday, Martins Ferry resident Linda Cerva and her two grandchildren, 13-year-old Noah and 10-year-old Ava, were disappointed to hear that the long-standing store was to close.

“I’m bummed out that they’re (Sears) closing. I did a lot of shopping here. … I wish they would have done something to revive it. I mean, it’s been around for years. My grandmother used to shop here,” Cerva said.

Cerva said she has been shopping at the department store for more than 10 years, along with members of her family.

The family stopped at the store on Wednesday evening in hopes of finding some last-minute deals on school attire for the upcoming school year.

Unfortunately they did not have much luck.

“I was trying to find some school clothes for them (Noah and Ava). … They are all sold out. … The only things left are for men and little kids,” she added.

Cerva said she didn’t observe many people shopping on Wednesday, potentially due to the lack of apparel and supplies remaining on the shelves.

“Just a few stragglers,” she said.

Noah and Ava said they would like to see a Target replace the store once it has closed.

“We do a lot of shopping at Target,” Ava said. “I like to get my school supplies there; they have cute pens and notebooks.”

Currently there is still no word on what will replace Sears at the OV mall.