Brennan Introduced as New Bishop of Diocese of Wheeling-Charleston 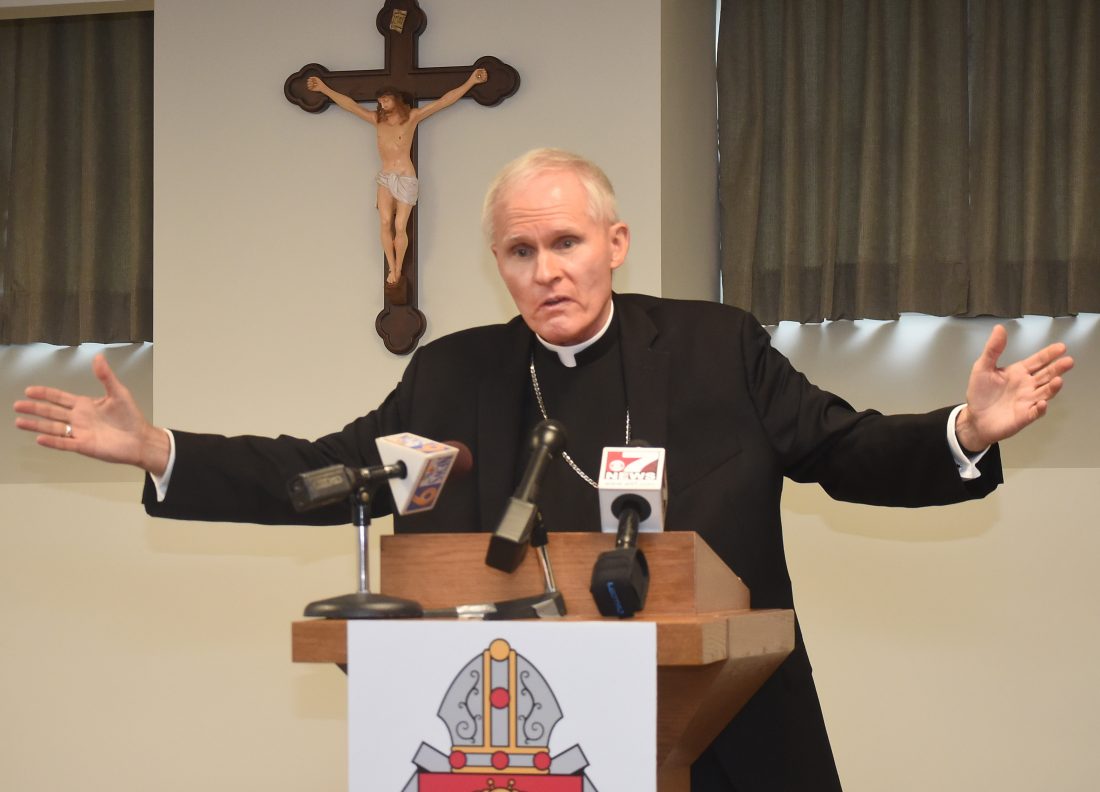 Photo by Scott McCloskey The Most Rev. Mark Brennan, the auxiliary bishop of Baltimore, speaks Tuesday during a press conference in Wheeling announcing his appointment to serve as bishop of the Diocese of Wheeling-Charleston.

WHEELING — The Most Rev. Mark Brennan said his highest priority as the Diocese of Wheeling-Charleston’s new bishop is to work for “true reform” and “to open our minds and hearts to the healing power of Christ’s unconditional love.”

Pope Francis today named Brennan, 72, as the Roman Catholic diocese’s ninth bishop. He was introduced during a press conference this morning at the diocese’s Chancery Building.

Brennan will be installed as bishop in a service at 2 p.m. Aug. 22 at the Cathedral of St. Joseph.

Currently the auxiliary bishop of the Archdiocese of Baltimore, Brennan succeeds the Most Rev. Michael Bransfield, who resigned as bishop last September amid allegations of misconduct.

Last week, Pope Francis issued severe restrictions on Bransfield by prohibiting him from living in the diocese or leading religious services in any setting.

Speaking at the press conference, Brennan said, “As I stand before you for the first time as your soon-to-be new shepherd and servant, I want you to know how acutely aware I am of the deep disappointment and pain you have experienced as a result of your former bishop’s misdeeds.”

Brennan said he is directed to ensure that Bransfield “makes amends for the damage he has done.”

Brennan said that before making any decisions, he will consult with the diocese’s College of Consulters (a group of priests), finance council and others who experienced Bransfield’s abusive behavior.

The incoming bishop said he hopes Bransfield will be cooperative in making amends. Brennan said the Church has leverage against Bransfield because he hasn’t been defrocked.

“He (Bransfield) is still subject to the authority of the Church. I hope that is enough to get him to cooperate,” Brennan said, adding that other options exist if the former bishop is uncooperative.

Acknowledging that people have been hurt and saddened by Bransfield’s misdeeds, Brennan said, “Our faith does not depend upon one individual … Our faith depends upon Jesus Christ.”

For those struggling with forgiveness, Brennan said, “Christ gave us the words in the Lord’s Prayer: ‘Forgive us our trespasses as we forgive those who trespass against us.'”

He noted that Christ also asked God to forgive the people who crucified him.

“It can be very hard … Forgiving doesn’t mean denying what was done,” Brennan said.

The Most Rev. William Lori, archbishop of Baltimore, has served as apostolic administrator of the Diocese of Wheeling-Charleston for the past 10 months. “He (Lori) deserves our gratitude for taking on a most onerous task, removing some obstacles, reducing others and beginning the arduous work of reform, so that we can move forward together as a local church to honor, serve and proclaim Jesus Christ,” Brennan said.

The incoming bishop promised to listen carefully and be available to people of the diocese.

“I’m not a magician. I’m not a wonder worker. I’m your brother in Christ and I’m willing to work hard with you to make this corner of the Lord’s vineyard a place of faith as steadfast as the mountains, of hope as invigorating as fast-flowing streams and of love as welcoming as the sun,” Brennan told today’s audience.

Brennan, who was ordained in 1976, has been Baltimore’s auxiliary bishop for two and one-half years. Prior to that appointment, he was a parish priest for 40 years in the Archdiocese of Washington, D.C., where he also served as director of priestly vocations for 10 years.

A native of Boston, Brennan spent his early years in Boston and Washington, D.C. His late mother was from Washington, Pennsylvania, and his parents built their retirement home in 1980 in Martinsburg, West Virginia.