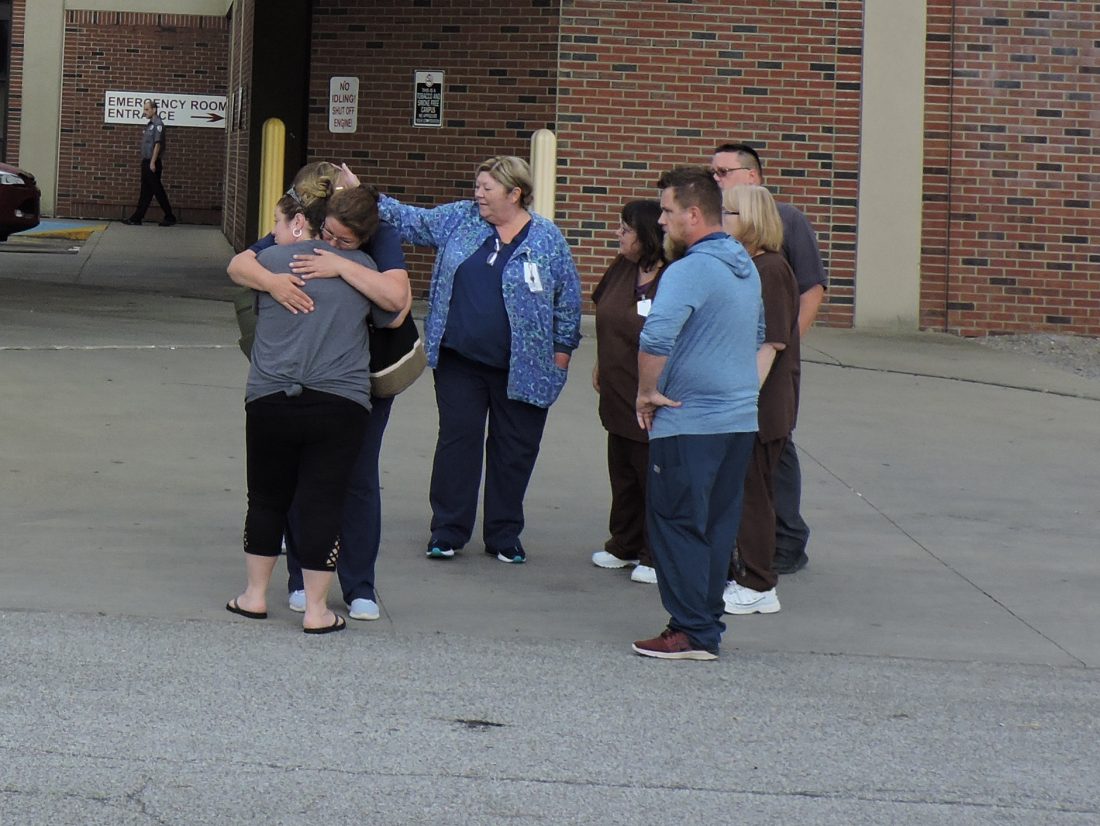 Employees filter out of East Ohio Regional Hospital and discuss their impending layoffs after a perfunctory meeting. EORH and Ohio Valley Medical Center announced they will close within 60 to 90 days.

President and CEO Daniel C. Dunmyer announced Wednesday that the two facilities will close in two to three months. He cited a $37 million loss over two years and the inability to secure a strategic partner as reasons for beginning the closure process.

Employees at OVMC and EORH learned Wednesday that the hospitals will close in 60-90 days. The closures will put about 1,200 employees out of jobs.

Forums in OVMC’s amphitheater began at 7:30 a.m. Thursday, with additional sessions scheduled for 11:30 a.m. and 3:30 p.m. The sessions were closed to the public and media.

Outside the amphitheater, some employees could be heard blaming Alecto Healthcare Services, the for-profit hospitals’ parent company, for the current situation. One employee questioned the fate of a defined pension plan if OVMC closed or filed bankruptcy. Similar forums were being held at EORH at 9:30 a.m., 1:30 p.m. and 5:30 p.m. today. An additional meeting is set for 6:30 a.m. Friday at EORH.

“It’s disheartening,” said an OVMC employee, who declined to give her name, after Thursday morning’s meeting. “I work in the mental health facility.”

“There’s not anything (else) in a 75-mile radius,” the employee said if Hillcrest closes. “I worry about our patients. I can find another job. There’s always going to be health care. But it’s disheartening for our patients.”

Officials with Northwood Health Systems indicated Thursday they will remain open as Alecto begins the shut-down process of Ohio Valley Medical Center and East Ohio Regional Hospital. Northwood is a private business that rents space from OVMC at its Wheeling campus.

Dunmyer also placed part of the blame on alleged conduct by Wheeling Hospital that is outlined in a pending court case. According to Dunmyer, the decision to begin the closure process was based on, among other things, these factors:

∫ OVMC, EORH and their physician practices have lost more than $37 million over the past two years as they struggled to overcome declining volumes, declining reimbursement and the substantial harm caused by the conduct alleged by the government in United States of America ex. rel. Louis Longo v. Wheeling Hospital Inc., R&V Associates LTD. and Ronald L. Violi, United States District Court for the Northern District of West Virginia Case No. 5:19-cv-00192-JPB.

∫ OVMC and EORH have been unable to compete with Wheeling Hospital and its business practices including, without limitation, those alleged in United States of America ex. rel. Louis Longo v. Wheeling Hospital, Inc., R & V Associates, LTD., and Ronald L. Violi, United States District Court for the Northern District of West Virginia Case No. 5:19-cv-00192-JPB.

∫ OVMC requires substantial improvements to its physical plant and the continued losses at OVMC and EORH do not leave funds available to complete such improvements.

At both OVMC and EORH, employees were called to a 5:30 p.m. Wednesday meeting. The OVMC session was held in the hospital’s cafeteria and was closed to the public and media. Employees at EORH met in the Wilson Room.

Within 10 minutes, they exited both rooms with long faces. Multiple employees confirmed they had just been given a written notice that the hospitals will be closing.

Some sobbed while others were seen embracing. A few talked among themselves and couldn’t contain their anger.

“They did this to themselves,” one employee in Wheeling was heard saying.

At EORH, employees left the building in droves, most using their cellphones to make calls.

“It’s just a sad day,” said a 10-year employee who declined to give her name. “This is our family. We know each other’s kids, the goings-on, the good, the bad. … They threw us out like dirty diapers.”

EORH employee Donna Cika said there had been rumors of one facility closing, but the news that it would be both came as a total shock.

“I was expecting East Ohio to still stay open, because the closest hospital on this side of the river is Trinity (Health Systems), so I figured we’d at least have a hospital here,” Cika said. “It’s a tear-jerker.”

Trinity Health Systems in Steubenville is one of two nearby hospitals for Belmont County residents, along with Barnesville Hospital.

Nelson said the employees were not permitted to ask questions at the brief meeting Wednesday.

The hospitals may remain open if a buyer for the facilities is found before the projected Oct. 7 closure. However, no offers had been extended as of Wednesday, according to a Q&A handout given to employees.

Employees’ accrued paid time off will be paid out at their termination, unemployment compensation will be available as normal. However, the hospitals “(do) not have the funds to afford a severance program,” and insurance coverage will persist until the end of the month of an employee’s termination.

Alecto Healthcare Services has owned OVMC and EORH since June 2017, when the company acquired the hospitals from Ohio Valley Health Services and Education Corp. during a time of serious financial strain. At the time of the transaction, Alecto committed to keep both hospitals open despite the significant financial and operational issues associated with the prior management of the facilities.

In March, 70 employees between the two hospitals were laid off, with officials again citing financial matters.