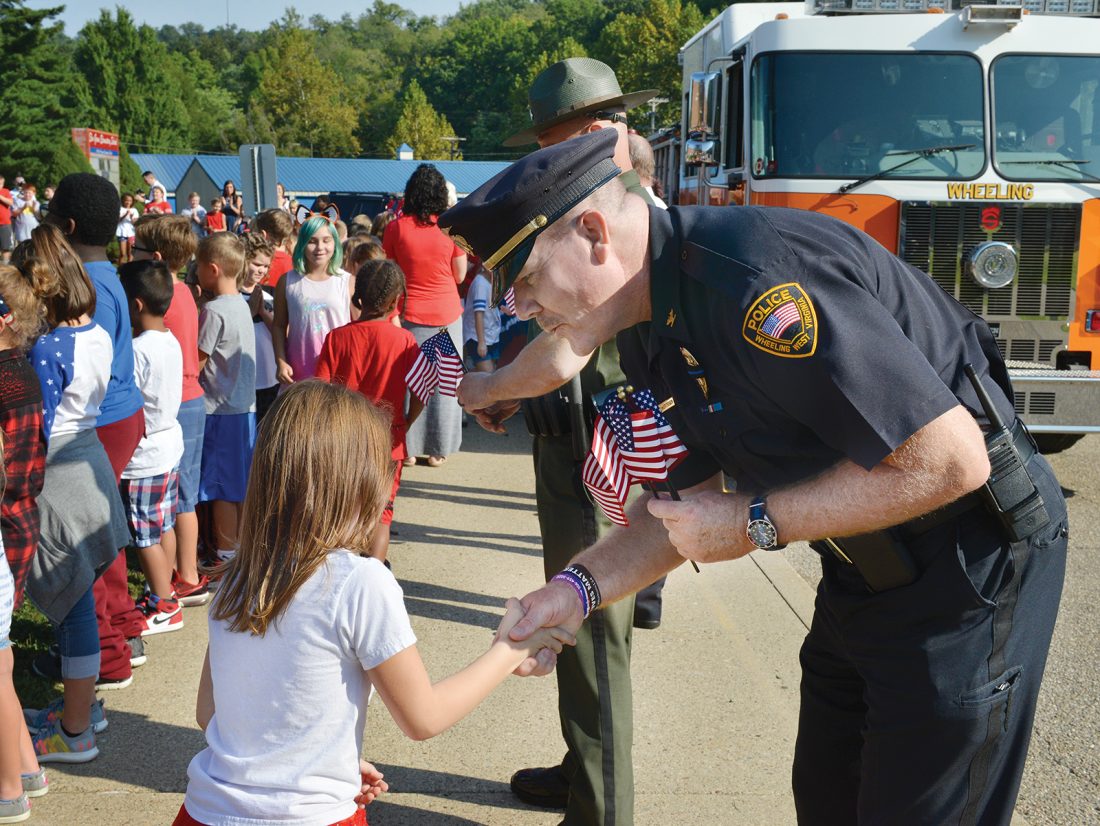 Local first responders, including Wheeling Police Chief Shawn Schwertfeger, were invited to attend Elm Grove Elementary School’s annual Patriot Day tribute to the victims of the Sept. 11 terrorist attracks Wednesday morning during a ceremony on the front lawn of the school.

WHEELING — The tragedies on Sept. 11, 2001 happened a decade or more before they were born, but students at Elm Grove Elementary School stood to learn and honor their importance Wednesday morning.

The school’s flag flew at half-staff as students were led out to the front yard at the start of the day for the school’s annual Patriot Day ceremony.

There are 335 enrolled in grades pre-kindergarten through fifth grade at Elm Grove Elementary, and those present lined the walkways outside the school to face the flag.

Students carrying flags presented them to first responders in attendance.

Principal Richard Dunlevy began by telling the students the Patriot Day ceremony at Elm Grove Elementary was started to commemorate the events of Sept. 11, 2001, when nearly 3,000 people died as a result of terrorist attacks on American soil. Many of them were firefighters and police officers, he told the students.

“We always want you to remember this day, though it happened before you were born,” Dunlevy said.

He said people alive then always remember where they were when the attacks occurred, and that he had been a teacher at Wheeling Park High School that day.

“Go home and ask your parents where they were that day, and what it means to them,” Dunlevy said.

Some students present indicated they already had spoken to their parents about the meaning of “Patriot Day.”

Fifth-grader Michael Hunter said he learned about the events of Sept. 11, 2001 from his mother, Mona Hunter.

Hunter expressed remorse when thinking of those whose lives were sacrificed that day.

“I’m sorry for the people who were on the planes, and for their families,” he said. “I know if something like that ever happened to one of my siblings, I would never be the same.”

His classmate, Jocelyn Church said she spoke with her mother Nikkie about Patriot Day.

“I watched about it on the news,” she said. “I just feel sad and hope it never happens again.”