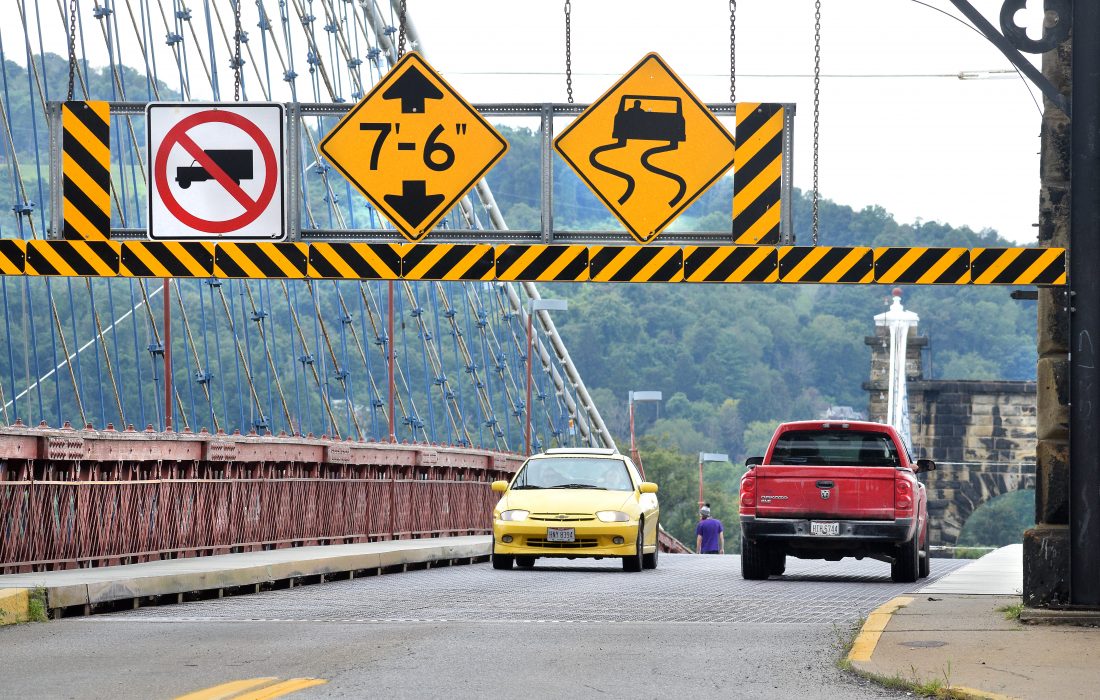 The Wheeling Suspension Bridge reopened last month after being closed to assess and repair structural damage caused by a tour bus.

WHEELING — Friends of Wheeling, a local preservation group, is offering suggestions for curbing misuse of the Wheeling Suspension Bridge by overweight vehicles.

Five members of Friends of Wheeling’s board of directors conducted the vehicle survey between 8 a.m. and noon last Friday.

A total of 707 vehicles crossed the bridge during that time, and 141 were overweight, said Jeanne Finstein, board president of Friends of Wheeling.

About 45 percent of the overweight vehicles had Ohio license plates, she added.

The West Virginia Division of Highways recently installed new vertical barriers on the bridge in an attempt to deter overweight vehicles from using the span that connects downtown to Wheeling Island.

The bridge reopened Aug. 13 after being closed for more than six weeks to assess and repair structural damage caused by a tour bus.

“Needless to say, more needs to be done to protect the bridge,” Finstein said, adding, “If abuse can’t be stopped, we ask that the bridge be closed permanently to vehicular traffic.”

Observing that “signs don’t work,” she said Friends of Wheeling’s board has suggestions for protective measures.

“It was our understanding that, in addition to the 7-foot, 6-inch solid bar, chains extending at least another foot were to have been installed as a flexible warning. We ask that those be added immediately,” she said.

In addition, she said, “It’s understandable that a police presence 24/7 isn’t possible. However, we suggest occasional ticketing that could serve as an effective deterrent, started immediately.

“Friends of Wheeling and the city should mount a city-wide awareness campaign through media outlets, letting users know of the importance of the bridge and the need to self-monitor,” she said, noting that vehicle weights can be found on car registration cards.

“The survey consisted of making tallies of all vehicles crossing the bridge during the four-hour time span and indicating whether their ‘curb weights’ (as found online) were over 2 tons or 4,000 pounds,” Finstein said, explaining the group’s methodology. “Nothing was added to account for passengers or other loads, despite the fact that the curb weights of several of the vehicles were within just a few pounds of the limit.”

“The 170-year-old bridge is a National Historic Landmark and a National Engineering Landmark and predates the birth of the state,” Finstein said. “More that 150 years ago, Henry Clay referred to it as ‘Wheeling’s Rainbow,’ and it’s a true symbol of our city. Its loss would be disastrous.”