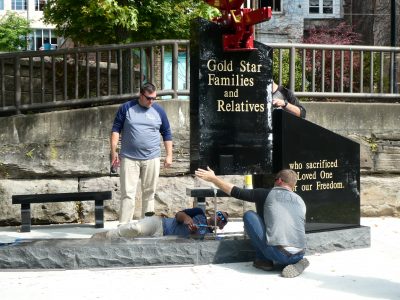 WHEELING — A monument in Wheeling commemorating the sacrifices of military Gold Star families losing loved ones to war arrived at Heritage Port Thursday, and now is set in place.

The delivery of the black granite tribute came a day earlier than expected, catching organizer John Nanny — chairman of the Hershel “Woody” Williams Scholarship Foundation — and others by surprise.

Workers with Bailey Monuments left their headquarters in Kentucky for Wheeling at about 6:30 a.m. Thursday, and began the massive task of unloading and placing the monument at Heritage Port just before before noon. The monument was set on a site overlooking the veterans amphitheater at Heritage Port as work continued throughout the afternoon.

The workers told Nanny they would be in need of electrical power at the site to complete the project.

Nanny could be heard conversing by phone with Wheeling Mayor Glenn Elliott and City Manager Robert Herron, telling them the monument had arrived early and city workers were needed to come turn on power to electrical outlets in the vicinity.

“This is my baby. I did it all, but not without the help of others,” Nanny said.

He raised more than $62,000 for the monument, drawing upon the contacts he made while working with the Ohio County Sheriff’s Department and assisting juveniles in the court system.

“I did it by word of mouth and begging,” Nanny said of his fundraising efforts. “I worked for the public for 45 years, and I was familiar with the political opportunities.”

He first approached Ohio County Commissioner Randy Wharton, who like Nanny is a former Marine. The commission allocated the first $10,000 to the project, which was later matched by the city of Wheeling. The Diocese of Wheeling-Charleston also contributed $10,000 to the effort.

The Fourth Street United Methodist Church donated $5,000, and another $5,000 resulted following a contribution of proceeds from this year’s Ogden Half-Maratahon Classic.

The Bordas and Bordas and Fitzsimmons law firms also gave money for the monument, as did many individual attorneys in Wheeling, according to Nanny.

“I got the last invoice yesterday,” Nanny said. “It was marked ‘paid in full.'”

Money not used will go to the Hershel “Woody” Williams Medal of Honor Foundation, which is championing the construction of similar Gold Star Families Memorial Monuments across the U.S. One of these is being planned for Moundsville.

Williams is a West Virginia native — now age 95 — who received his Medal of Honor for his efforts during the Battle of Iwo Jima during World War II.

He spoke at last year’s veterans ceremony at the Undo’s Upper Ohio Valley Italian Heritage Festival, and challenged Nanny from the podium to spearhead an effort to bring a Gold Star Families Memorial Monument to Wheeling.

“Our biggest problem now is getting Woody up here for a dedication,” Nanny said. “He’ll be 96 on Oct. 2, and he is still out and about and doing things.”

Nanny said Williams’ grandson told him Williams’ schedule may permit him to be in Wheeling sometime in late November.