Span to close to all traffic for one year 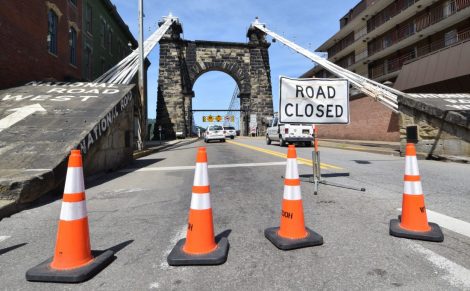 File Photo In this file photo from earlier this summer, the bridge was closed to vehicle traffic after a charter bus, far in excess of the 2-ton weight limit, crossed the bridge.

WHEELING — Wheeling’s historic Suspension Bridge will close to all vehicular traffic beginning Tuesday, and the closure likely will last for at least a year, state Secretary of Transportation Byrd White told the News-Register Friday.

“Something’s going to happen if we keep vehicles on it,” White said of the reasoning behind state officials’ decision to restrict use of the span.

Pedestrians and bicyclists will be permitted to use the bridge.

The bridge, which turned 170 years old this year, had been closed for about six weeks this summer after a charter bus, far in excess of the 2-ton weight limit, crossed it from the Island, getting stuck under a barrier on the downtown end. An inspection by HDR Engineering of Weirton disclosed some damage to the bridge’s structure.

State Division of Highways crews installed new barriers to keep oversized vehicles off the span, and it was reopened Aug. 13.

But a few weeks ago, the Friends of Wheeling, a local historic preservation group, monitored traffic across the bridge. Of 707 cars and trucks crossing it one day, 111 exceeded the weight limit, the organization reported.

“People just ignore” weight limit signs posted prominently at the entrances to the bridge, White said. There was no alternative other than closing it to vehicles to avoid additional damage to the structure, he added.

DOH officials plan a major rehabilitation project on the bridge sometime during the next year or so, White said. Once that is completed, the closure will be reevaluated, he added.

“God forbid something happens to that bridge,” he said. “Not on my watch.”

Wheeling Mayor Glenn Elliott said his main priority remains saving the bridge after he learned of the planned closure.

“Ultimately it’s the state’s decision. We have to respect that,” Elliott said. White “did say that the bridge is scheduled for repairs in 2020 or 2021, and it’s possible after those repairs are made it will be able to be reopened.”

The bridge serves as an important connector for Wheeling, in particular for residents who live on Wheeling Island, he added.