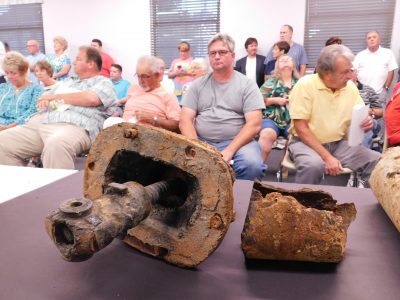 Rusty parts from the St. Clairsville water system are on display Monday night before a crowd of residents while city council debates privatization or local control and the Ohio EPA mandates costly improvements.

ST. CLAIRSVILLE — The expected first reading of a water and wastewater privatization contract between the city and Aqua Ohio, the state-regulated entity that has offered to purchase the aging system, was moved to Oct. 7.

But on Monday, city leaders held the first reading of an ordinance instructing the city to work with W.E. Quicksall & Associates and the Rural Community Assistance Partnership to arrange an independent study and explore other options, prices and likely rate increases that might allow the city to retain local control.

Councilwoman Beth Oprisch, who originally voiced the idea for the resolution, asked that it be passed as an emergency measure. Councilman Perry Basile seconded, but the motion was defeated four to three, with Oprisch, Basile and Councilman Mike Smith in favor and council members Linda Jordan, Frank Sabatino, Jim Velas and Mark Bukmir opposed.

Mayor Terry Pugh said the contract negotiation process with Aqua Ohio is ongoing. He said council would have a full three readings before accepting or rejecting the contract. Several weeks ago, the Ohio EPA found algal blooms in the reservoir that could lead to harmful toxins, and has since listed numerous violations with the water system and costly mandates for repairs and upgrades. Pugh has said Aqua Ohio has the expertise and capital to address these issues.

The council room was again packed with residents and several had arranged to speak, expressing dissatisfaction with the water situation and with Pugh and Safety and Service Director Jim Zucal.

One resident, Jody Williams, said Pugh and Zucal have been condescending and have not provided sufficient information.

Local businessman Mike Osovich criticized the city administration, saying it had not maintained the water system.

“This did not happen overnight,” he said. Osovich also said he believed the administration delayed hiring a Class 3 water operator as mandated by the EPA because they did not anticipate opposition to privatization.

“We’re facing staggering fines by the EPA. … The mayor and Mr. Zucal have been caught with their pants down and we the residents are expected to pay. … I’m appalled and embarrassed by the current administration and many of the council members.”

His wife, Kathy Osovich, a realtor, said she is seeing a reluctance among people to buy property in the city and fears the negative coverage could damage property values.

Afterward, Zucal addressed this, saying she was referring to a water quality report that did not take city operations or distribution into account. He said in recent years water temperatures and other factors have contributed to recent harmful algal blooms in many cities.

During the meeting, Zucal gave an overview of the water situation. He said the city continues to advertise in numerous publications and on the city website, but has had no results. He speculated this was due to a lack of Class 3 operators in the area, an unwillingness to take on the job with a water system in such poor condition and with the future of the system in doubt.

Zucal added the city is unable to meet some of the EPA’s mandates, including reducing excessive water loss which has reached 52 percent in August. He said 25 percent of the waterlines are 4 inches in diameter and insufficient for firefighting needs.

“There are issues we simply aren’t equipped to address without additional resources,” he said. “Our hope is to pass the responsibility on to an organization that has experience with massive projects such as these.

Councilman Perry Basile said he has spoken to an engineer. Basile said some of the mandated water plant repairs have manageable costs and the city could target these.

Zucal pointed out the more costly mandates, including draining a reservoir in order to replace an inoperable surface intake opening.

“We’re talking about a main reservoir that would be millions of dollars,” Zucal said.

Zucal had said if the city retained local control, in order to apply for grants and loans the minimum rate increase would be between 1.8 and 2.3 percent of the median household income, which is $68,000, and the EPA recommending 2.5 percent.

However, the RCAP spokeswoman said there may be lower options, if factors such as water use are taken into account.