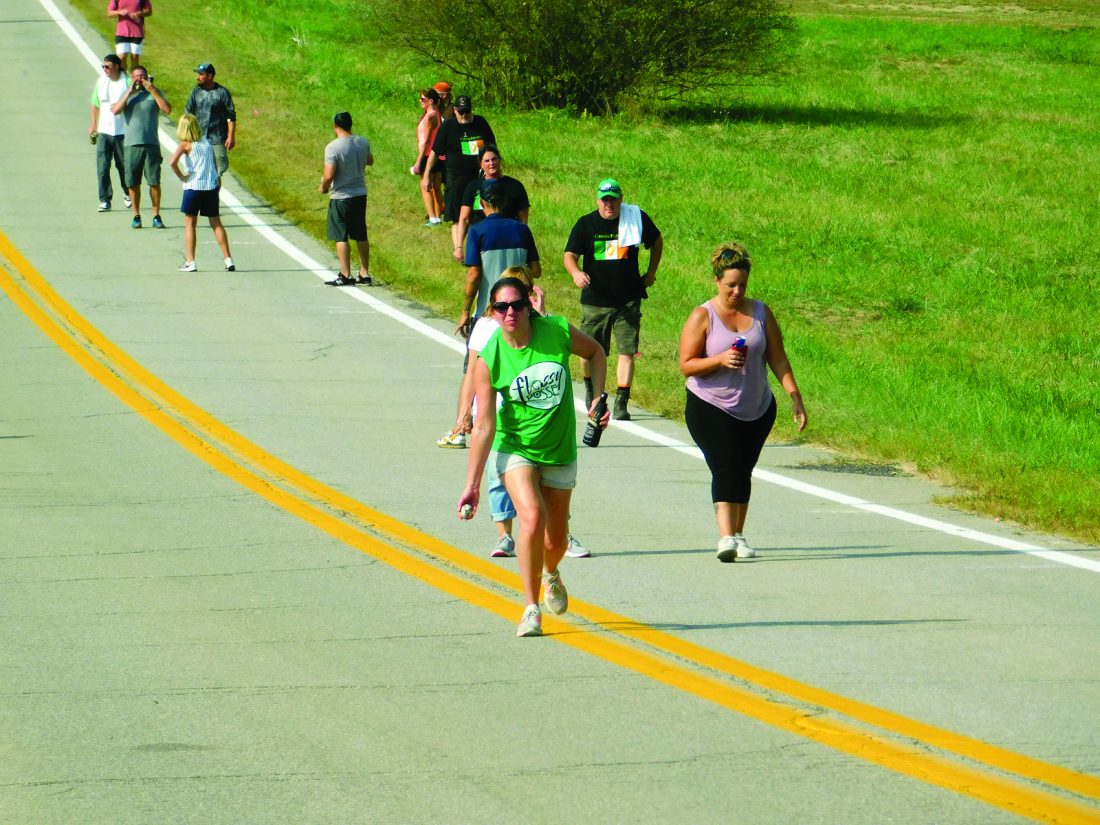 By Robert A. DeFrank Holly Harrington of Wheeling makes a throw Saturday during Irish Road Bowling in Wheeling in the park.

WHEELING — The ancient sport of Irish Road Bowling came to the city once again on Saturday, as almost 1,000 participants joined in a celebration of Irish and Catholic heritage and generally enjoyed the sport.

“This is the largest in the world. We had over 900 bowlers last year,” Ohio County Commissioner Tim McCormick said. “It all started with a group called the Ancient Order of Hibernians. It’s an old historical group.”

The popular Irish sport involves taking a two-pound steel ball and rolling it along a country road. The course is about one-and-a-half miles.

“It’s like golf. You start at Point A, you want to get to Point B with the fewest rolls that you can make,” McCormick said. “It’s usually a team of four. … Whoever gets to the finish line in the fewest rolls is the winner. Our family has done it for several years. It’s a great time. It’s a great social event. There are people coming in from all over the place to join this thing.”

“The county commissioners are one of the main sponsors of this, through the hotel motel tax, because it fits the bill as far as tourism and recreation.”

“We’re very proud to do it because it does bring a lot of folks into town, and people stay around the entire day. Some folks make a weekend out of it.”

Teams showed up in costumes, uniforms, and traditional kilts as they bowled along Wheeling Park.

“This is actually the 10th year of the Irish Road Bowling event,” Tom Murphy of the order said. “We’ve been doing it quite awhile. We expect 150 teams.

“People are enthusiastic just because it’s a fun event, and it’s also a fundraiser for our organization,” he said. “The funds we raise, we donate back to the community.”

He said donations include three $1,000 scholarships and several charities across the Ohio Valley.

“We call it Irish Road Bowling because it originated in Ireland. It’s kind of a rural sport. Something fun to do and for the community to get together,” Murphy said. “I think the majority of the people that come are from the Ohio Valley area. I’m sure some that come are from the surrounding states, but it’s mainly West Virginia, Pennsylvania and Ohio.”

“We’ve grown every year,” Tom Connelly, president of the Wheeling chapter of the Hibernians, said. “It’s great we have this much support from the community. … Every year we have more people joining, and that’s why there are more people coming and coming. It’s never gone down. It’s always gone up.”

Dennis Parks, member of the National Board of the Hibernians, was impressed by the Wheeling event.

“This is one of the best events of the county,” he said. “The people in Wheeling do a fantastic job.”

This was a first year of competition for Eric McIntire of Warwood and Rick Comer from Clearview.

“It’s a great event for a great cause. All the money raised goes to charities and scholarships,” McIntire said.

“We’ve been doing it every year since it came to Wheeling,” Roger Cain of St. Clairsville said.