Injuries, Deaths From Products on the Rise 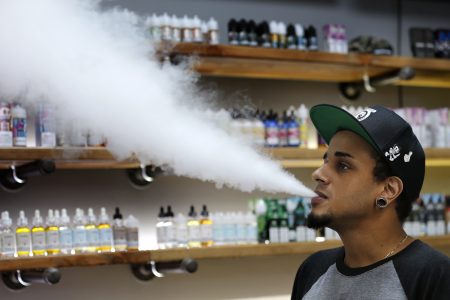 In this Tuesday, Sept. 3, 2019, photo, Andrew Teasley, a salesman at Good Guys Vape Shop, exhales vapor while using an e-cigarette in Biddeford, Maine. Efforts to ban flavored e-cigarettes and reduce their appeal to youngsters have sputtered under industry pressure in over a half-dozen states this year. The industry and its lobbyists urged lawmakers to leave mint and menthol alone. A proposed ban that President Donald Trump outlined Wednesday, Sept. 11, would supersede any state inaction and includes a ban on mint and menthol. (AP Photo/Robert F. Bukaty)

WHEELING — An area pulmonologist has joined other experts in warning about the danger of electronic cigarettes, amid a nationwide spate of vaping-related deaths and illnesses.

Use of vaping devices “is definitely a big NO,” said Dr. Aarthi Ganesh, a pulmonologist at Wheeling Hospital.

Vaping-induced injuries haven’t been reported locally yet, but the doctor warned: “It’s only a matter of time.”

Currently, health officials across the country are investigating more than 450 cases, including six deaths, of lung disease linked to vaping.

The West Virginia Bureau for Public Health is investigating what it has termed “sporadic” cases of pulmonary illness. Ganesh said serious illnesses have been reported in at least 22 states.

Initially, manufacturers touted e-cigarettes as a safer alternative to conventional cigarettes containing higher concentrations of nicotine. However, a recent rash of mysterious lung illnesses has raised alarm in the medical community and among government officials.

An area of concern, Ganesh said, is “a rise in vaping with other products, such as marijuana, THC and home brews.”

These substances are more dangerous than nicotine, potentially leading to totally different diseases, she said.

In addition, home brewing lacks quality control. Consumers have no way of knowing exactly what ingredients, contaminants or concentration of substances are contained in homemade or off-brand vaping devices.

“There is no regulation (of vaping devices) at this time, which makes it more dangerous,” Ganesh said.

The pulmonologist thinks state representatives, the U.S. Centers for Disease Control and Prevention and the federal Food and Drug Administration should develop regulations for the manufacture and sale of this product, with particular emphasis on curbing teenagers’ access to vaping devices.

“These companies should take some action, too. Now that it (the problem) is very upfront, action should be taken,” she said, referring to makers of e-cigarettes.

Severe lung injuries could be related to e-cigarettes’ ingredients or the actual vaping process, she said.

The West Virginia Bureau for Public Health and state health officer Dr. Catherine Slemp have issued a warning to medical professionals and facilities regarding pulmonary illnesses involving young people who have vaped nicotine and THC-containing products.

Use of e-cigarettes and conventional tobacco products is banned in restaurants, bars, hotels and other public buildings and in outdoor venues under Ohio County’s clean air regulations.

“Education at various levels should be helpful also,” Ganesh said.

The Belmont County Health Department, in cooperation with the county juvenile court system, is launching an educational program on the hazards of vaping.

Linda Mehl, director of nursing for the health department, said juveniles will be referred to the program by court officials. Their parents also will be required to attend sessions, she said.

Last week, Trump administration officials said they are moving to ban most flavored e-cigarettes to reverse the youth vaping trend.