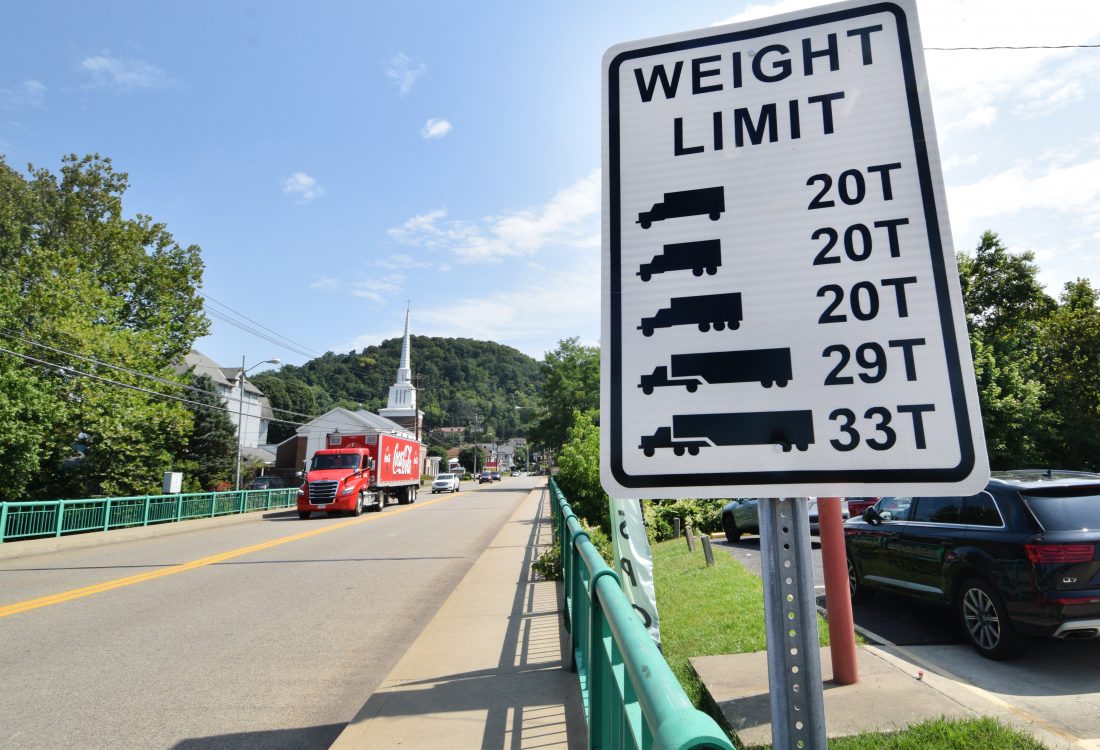 A truck passes over the Washington Avenue Bridge in Wheeling, which was deemed to be in poor condition by the West Virginia Division of Highways.

WHEELING — The city and the West Virginia Division of Highways are moving forward with a project to repair the Washington Avenue Bridge in Wheeling.

The Division of Highways agreed to fund part of the $7.1 million structural replacement work needed, City Manager Robert Herron said, and Wheeling City Council agreed on Tuesday to accept a grant from the agency.

Through its off-system bridges program, the DOH will provide about $5.7 million to repair the bridge if council approves a formal agreement for the project. The grant funds 80% of the total cost, so Wheeling would have to pay the remaining 20%, or $1.4 million.

The bridge, which spans Big Wheeling Creek, was inspected by the DOH several times in recent months, and the past two inspections indicated the bridge was in poor condition, Herron said.

In August, the city reduced the weight limit of the bridge to five tons, or 10,000 pounds, due to the DOH inspection. The bridge was constructed in 1947 and previously had a weight limit between 20 and 33 tons, depending on the vehicle.

Herron informed members of City Council on Tuesday that the DOH agreed to fund 80% of the project, and members in turn agreed to send a letter accepting the grant. Next, the agency will spend about 30-60 days drafting an agreement for the project that council will then consider via an ordinance, he said.

When asked how Wheeling will pay for the work, Herron said the city has $500,000 remaining in its oil and gas lease fund, $700,000 in sales tax money that hasn’t been allocated as well as additional oil and gas money to be deposited with the city in October.

Mayor Glenn Elliott also noted that half of the money raised by the city’s recently-approved user fee, to be implemented Jan. 1, will go toward infrastructure work. Herron confirmed that the fee could be used to pay for part of the Washington Avenue Bridge work.

Through the bridges program, the DOH would manage the entire project, including design, construction and administration, Herron said. The $7.1 total cost figure is also an estimate, he said, and the final cost may end up being less.

If council approves the formal agreement with the DOH, the city would need to escrow the $1.4 million likely by early next year, Herron said.

Construction would likely begin about six months after council approves the agreement. Herron said he plans to get a more defined timeframe for the project from the DOH after it receives council’s response.

In addition, the next bridge in the city in need of replacement is the Schilling Bridge in Elm Grove, City officials have had preliminary discussions with the state regarding funding that project, Herron said.