Wheeling to Hear from Developers On Plans for Market Street Buildings 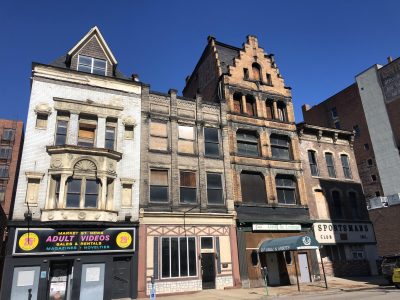 Mostly-vacant, city-owned buildings lie on the 1400 block of Market Street on Friday, where developers aim to reach a deal with Wheeling to rehabilitate the structures into apartments and businesses.

WHEELING — A row of city-owned, mostly-vacant buildings on Market Street may become the site of another rehabilitation project in downtown Wheeling if two interested developers’ plans come to fruition.

Arizona-based couple Ryan and Nikki Stoker hope to move to Wheeling to develop four buildings on the 1400 block of Market Street, and are set to meet with Wheeling City Council’s Development Committee at 4 p.m. today, according to Wheeling Heritage officials.

The two developers worked with Wheeling Heritage to determine the feasibility of rehabilitating the structures and ultimately concluded that doing so was possible, said Betsy Sweeny, historic preservation program manager.

The Stokers aim to purchase the buildings, located from 1425 to 1437 Market St., from the city for a nominal fee, such as $1. They plan to spend “hundreds of thousands” in private investment to perform structural work and ultimately open businesses and apartments on the premises, Sweeny said.

According to the meeting agenda, the Development Committee will meet in a closed door session to “discuss various property acquisition and development matters.”

Sweeny said the couple connected with Wheeling Heritage through happenstance. They visited Wheeling after considering various buildings across the country to develop, saw Boury Lofts and spoke with its building manager who recommended the organization.

The developers then worked with Wheeling Heritage and Sweeny, who acted as a professional resource to determine if the buildings are structurally sound enough to rehabilitate and what financial incentives are available, she said.

The buildings, which were built in the late 19th and early 20th centuries, feature a unique array of architectural styles that were appealing to the developers, Sweeny said.

Such styles apparent on the buildings’ facades include Italianate, neoclassical and Flemish revival, she said.

“I can see why these four buildings would garner national attention from someone that’s saying ‘hey, I could live anywhere, but if I’m going to live anywhere, I want to make sure I’m in love with the buildings I chose,'” Sweeny said.

The Stokers, who were not immediately available for an interview Monday afternoon, aim to live in one of the apartments they develop and become a part of the community, Sweeny said.

“He is not an out-of-state developer who wants to develop from a distance. He wants to live on that floor in that building as soon as possible,” she said of Ryan. “So there’s a real personal investment that is happening in order for his livelihood to make sense here.”

Though the buildings are in poor condition — the backs of several of them have collapsed — Sweeny concluded that they are structurally sound enough to conduct repairs largely due to the quality of timber and strength of masonry employed in the late 19th century. Most of the brick and woodwork remain in good shape more than 100 years later, she said.

“Fortunately, the quality of materials used in these buildings are their saving grace,” Sweeny said. “It was astounding how much is still in usable condition. You can’t leave a building like this forever. There is a definite expiration date and it is approaching, but as it stands right now it is savable. There are very few people certainly locally or even nationally who possess the unique combination you need of construction experience and ambition to come in and make an offer on these buildings.”

The developers first plan to perform a facelift on the buildings’ facades while performing major structural repairs. Two of the buildings’ roofs need replaced, while the other two need repairs.

The couple also plans to activate two storefronts, which would house their own furniture and medical spa businesses, within the first one to two years of development.

Wheeling Heritage, meanwhile, hopes that the rehabilitation will improve the experience for pedestrians walking down Market Street in the downtown area.

“We want this to be this pedestrian corridor, this great place with walkability downtown,” Sweeny said. “These buildings were built when pedestrian walkability was of the utmost importance. They were already built to accommodate that. This just helps move that forward.”

Sweeny added that several financial incentives will be available for the two developers to use, such as state historic tax credits, state development grants and the city’s facade improvement grant program.

In March, the city approved a deal to sell vacant buildings on the 1100 block of Main Street for a nominal fee to developers Main Street Ventures, with plans for rehabilitation. The city invested a total of $650,000 in the properties while the developers will spend about $1.3 million on the renovation work.