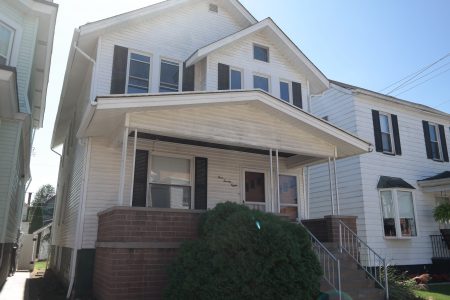 A house expected to become a recovery group home lies on 19th Street in Warwood on Thursday. Wheeling’s Board of Zoning Appeals approved a request to increase the maximum number of occupants for the home despite concerns from neighbors.

WHEELING — A vote by Wheeling’s Board of Zoning Appeals on a request for a recovery home in Warwood was met by about 20 residents holding up signs in protest.

The board ultimately voted 3-2 to approve a request for reasonable accommodation for an Oxford House on 19th Street in Warwood as well as on Valley View Avenue in Pleasanton. Chairman Ron Sinclair, Jason Smith and Robert Dobkin voted to approve the request, while Stephen Johnston and Marty Maness voted to deny it.

The request sought to increase the maximum number of occupants in the houses from five to seven in Warwood and six in Pleasanton. Oxford Houses function as self-run group recovery homes for people suffering from addictions to alcohol and drugs.

During the meeting, about 20 Warwood residents held up pieces of paper reading, “No more than five people. Support the residents … vote no.”

The requests did not warrant a public hearing because the matter is governed by the Fair Housing Act and the U.S. Department of Justice, said Tom Connelly, Wheeling’s assistant director of economic and community development.

For residential zoning, the city’s definition of a family is no more than three unrelated people, and its maximum is five people for houses with disabled individuals, Connelly said.

To allow more than five people, the Fair Housing Act requires that Wheeling make a “reasonable accommodation” in its zoning laws for handicapped people. The U.S. Supreme Court ruled that alcoholism, drug addiction and mental illness are handicapping conditions in 1995.

Specifically, the Board of Zoning Appeals had to answer two questions in deciding the reasonable accommodation requests for the Oxford Houses, Connelly said.

“Does the request impose undue burden or expense on the local government? And does the proposed use create a fundamental alteration in the zoning scheme?” he said. “If the answer to either question is yes, then the requested accommodation is unreasonable.”

Several board members expressed concern that if the board were to deny the request, the Department of Justice could pursue litigation on the basis of discrimination.

“If there is a denial and this has to go to court, we have to justify the reason why it was denied,” Sinclair said.

Johnston expressed opposition to the request, arguing that Oxford House is functioning as a business by finding tenants for property owners to rent to.

“They’re going to push this federal guideline down the throats of all these people who don’t want this in our neighborhood,” Johnston said. “I’m sympathetic for the people who have an addiction problem, but these (neighbors) have an investment. What they’re worried about is this business model being imposed in the neighborhood. It’s a difficult situation.”

Pamela Jackson, a coordinator for Oxford House who spoke at the meeting, said the organization is a nonprofit. When asked, she said the houses only accept people who have been clean for more than 30 days.

Wheeling already has other Oxford Houses in operation, including another on Valley View Avenue and one on Eoff Street, according to its website. Smith noted that the board has always approved reasonable accommodation requests in the past.

“We’ve voted on these types of things and the precedent has always been to accept the accommodation under the Fair Housing Act,” Smith said. “We’ve never voted no. I don’t think the board’s found that requests were not reasonable.”

One resident who attended the meeting, Carolyn Thompson, said she and other Warwood residents have several concerns that the occupants of the 19th Street Oxford House would pose a risk to the neighborhood.

“The reason we are so very upset is because most of us have lived here for our whole lives. We’re family and we are afraid that this is going to be a problem,” Thompson said. “Because 80% are criminals and 95% are going to fall off the wagon and going to rob you.”

According to Oxford House, 78% of its residents have served jail time, with the average length of one year.

“This is understandable since as many as 80% of the current jail and prison population are alcoholics and drug addicts,” the organization’s website reads. “Oxford Houses seem to stop the recycling in and out of jail or treatment facilities.”

Oxford House also maintains that its success rate of maintaining sobriety is high. One study that followed Oxford House residents across the country for more than two years found that only 13% relapsed.

Thompson said she is sympathetic with people experiencing addiction but said she and her neighbors are concerned with the number of people that will live in the 19th Street house.

“I’m sorry if they have problems. Between my husband and I, we’ve had 10 nieces and nephews taken because of drugs. It’s horrible,” Thompson said. “But we really don’t want seven people trying to help themselves in this really tiny space … right next to the neighbors. It’s really not fair.”