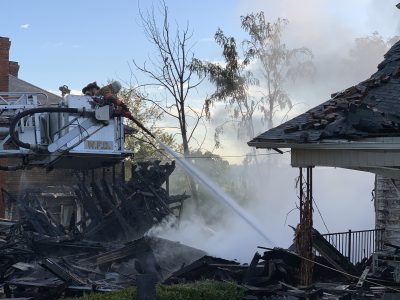 WHEELING — A two-alarm fire destroyed two houses and damaged a third home along South Frazier Avenue in the Mozart area of Wheeling early Tuesday. No injuries were reported.

Wheeling firefighters were called to the scene at 10 S. Frazier Ave. at about 3:15 a.m. Assistant Fire Chief Tony Campbell said he was the first to arrive, and found a vacant structure fully engulfed in flames.

“It was burning from the basement to the roof. It collapsed within minutes,” Campbell said.

That home’s owners, Ben and Megan Dunaway, and their young child escaped uninjured. The family’s dog also got out of the house unscathed. The family is now staying with relatives near Washington, Pa.

“I saw that baby crib in the window … I was glad to see the family was already out of the house when I got here,” Campbell said.

He said he believes smoke alarms alerted the family of the fast-moving fire. The house was decorated with Halloween items, and pumpkins remained intact on the porch this morning despite the destruction.

Occupants of the house at 8 S. Frazier Ave., also were unharmed, officials said. That house sustained exterior damage, but was saved, according to Fire Chief Larry Helms.

Helms and Campbell said the water supply to fight the blaze was an issue.

“There was enough water supply to fight one fire, but we were fighting three fires,” Helms said.

Helms said the flames in the collapsed structure then “ran the roof line” to 12 S. Frazier Ave.

Firefighters hooked up hoses to a fire hydrant located in front of the fire scene, and a second hydrant more than a block away also was utilized to fight the flames.

While a cause of the initial fire is under investigation, several neighbors said the vacant home at 10 S. Frazier Ave. had been a source of complaints this summer regarding tall weeds and visible trash on the roof of the property. One neighbor said police had been called to the structure at least once in recent months. Tall weeds were still visible in the yard Tuesday morning.

Campbell said firefighters were sent to the property in the summer and did a “walk around” the structure, noting that the house appeared to be filled with items; however, no one was living in the house.

Fire investigators will work to determine a cause of the blaze. Fire crews remained on the scene throughout the morning, dousing hot spots.

Engine 2 (Center Wheeling), Engine 4 (South Wheeling), Engine 5 (Wheeling Island), Rescue 1, Ladder 1, Squad 2 and additional off-duty personnel were called to the fire scene and to be on standby for any other emergencies within the city.