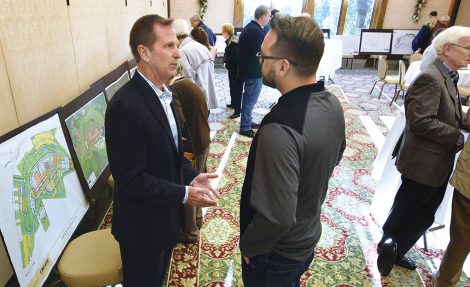 GC&P Development co-owner Kevin Coyne, left, and Wheeling Councilman Ty Thorngate talk at the company’s informational meeting held Tuesday evening at Oglebay Park’s Wilson Lodge. The meeting served as a forum for residents to ask questions and learn about the developers’ plans to build a “mixed-use village” on a hilltop in Woodsdale.

WHEELING — Woodsdale residents observed plans and asked questions at an informational meeting about a planned hilltop development in their neighborhood.

“What we’re trying to do here today is to answer your questions, one-on-one,” said Michael Hooper, counsel for GC&P Development. “If you have a concern, let us know. If you have support, let us know. The thing to remember is that this is a process, this is not yes or no.”

The meeting, attended by at least 50 residents, featured dozens of maps and renderings to illustrate the developers’ plans to create a village with commercial, residential, office and institutional space. GC&P Development owners Kevin Coyne and Douglas Grayson were also present to answer questions.

The preferred plan for the development includes retail shops, office space, a grocery store, a movie theater and residential areas with townhouses and assisted living. The developers also plan to make W.Va. 88 near the site more accessible through an improvement project.

“I think we can all agree that parts of W.Va. 88 need some work, and this project is going to assist in facilitating making that happen,” Hooper said.

Hooper asked attendees to fill out comment cards with suggestions or constructive criticism and encouraged people to sign a petition of support for the project.

The developers held the meeting in advance of consideration for various approvals by the Wheeling Planning Commission. First, the body must decide whether to amend Wheeling’s 2014 comprehensive plan to create a special area plan to accommodate the development.

“All we’re doing is asking the city of Wheeling to consider amending the comprehensive plan to allow us to move forward with one of the several plans we’ve presented,” Hooper said.

If the Planning Commission approves the amendment, it will next have to consider a zone change for the property and finally a site plan review at future meetings. The commission next meets at 5 p.m. Oct. 21 at West Virginia Northern Community College’s B&O Building Auditorium.

Maps at the meeting also showed the company’s plans for water mitigation and soil removal on the hilltop.

Hooper said the development will be designed so that runoff flows north and not into Woodsdale. Additionally, to prepare the site, about 9 million cubic yards of soil would be removed.

The company’s plans were reviewed by West Virginia’s Division of Highways and Department of Environmental Protection, which in turn delivered favorable feasibility letters to the city. The agencies will continue to work with GC&P moving forward, Hooper said.

“We’ve got a cracker plant coming in,” he speculated, referring to the PTT Global Chemical America/Daelim Industrial Co. ethane cracker proposed for Dilles Bottom in Belmont County. “Where are those people going to live? We want them to live in Wheeling. We want those tax dollars to come into Wheeling.”

More information about the development project can be accessed at gcp-dev.com and on Wheeling’s website at wheelingwv.gov/departments/Economic-CommunityDevelopment/gcp. 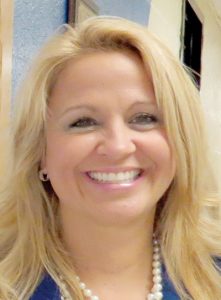