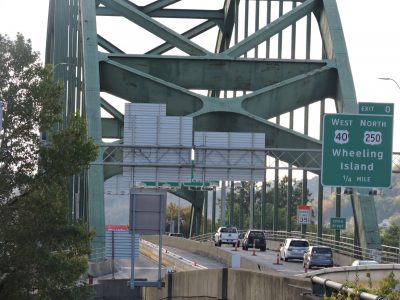 ST. CLAIRSVILLE — Belmont County residents voiced concerns to county commissioners after Saturday’s wreck and double fatality on I-470, which has some worried about available hospital service in the event of an emergency.

Jim Morrison of York Township inquired about the future of the East Ohio Regional Hospital in Martins Ferry, which stopped taking patients Sept. 27, along with the closing of the Ohio Valley Medical Center in Wheeling.

Morrison spoke about the heavy traffic and seemingly more frequent accidents that might delay transport across the Ohio River for treatment. Changing traffic patterns across I-70 and I-470 have slowed traffic significantly across the river, with traffic westbound through the Wheeling Tunnel occasionally coming to a complete stop.

“It’s hard to get across the river … to Wheeling Hospital. And (the insurance) networks — some people have insurance policies where this hospital isn’t in the network.”

He referred to the traffic accident on I-470, which killed two, including 72-year-old Bethlehem resident David R. Burke.

“I’m sure people worry about that kind of stuff,” he said.

“Having those two hospitals close is a huge blow to this area as far as health care is concerned,” Meyer said, adding that he has experienced delays in travel time to Wheeling of up to 20 minutes. “Now we have some of these traffic issues moving forward. … Let alone someone (in need of) health care … trying to get over to the hospital. Depending on what the need is, time is of the essence.”

Belmont County Commissioners Josh Meyer and J.P. Dutton heard Morrison’s concerns Tuesday. Commissioner Jerry Echemann was away on vacation, and scheduling concerns caused commissioners to move the meeting back from its usual Wednesday.

Meyer said the commissioners will continue to promote the hospital to potential investors.

“There’s some talks going on right now, but that’s all they are at this time. We’re hoping something comes to fruition,” Meyer said.

Richard Hord of Martins Ferry also asked for an update on overcrowding at the Belmont County Jail, asking if the crowding was becoming more managable.

“It’s still an issue,” Meyer said. “The numbers are just as poor as they’ve been in the past here recently. We’ve had as many as up to 212 (inmates) here recently.”

“We’ll be meeting with the sheriff very soon,” Meyer said. Topics will include options such as expanding or building a facility for misdemeanor-level offenders. “We’re looking at all options. … It’s a real issue. The numbers aren’t going to go down, so we’re going to have to do something moving forward.”

He said this was not a problem unique to Belmont County.

“We’re not the only ones dealing with it. It seems to be a statewide issue as well as across the country for that matter,” Meyer said.

Also, with the Halloween season approaching, the commissioners acknowledged some flying friends by recognizing National Bat Week this Thursday through Oct 31. Hannah Carpenter, operations manager of the Belmont Soil and Water Conservation District, spoke about the value of bats in controlling vermin. She said an educational tour will be held 4 p.m. to 6:30 p.m. at the St. Clairsville Bike Trail gazebo. The St. Clairsville Library will have a bat display up through Nov. 8.

“We have a lot of species of bats in Belmont County, including some that are endangered,” she said.

“It’s always been a hidden secret in this county. In the last few years, I’m glad they brought things out to let people know what they do over there,” he said.