Oglebayfest in Wheeling Kicks Off With Parade 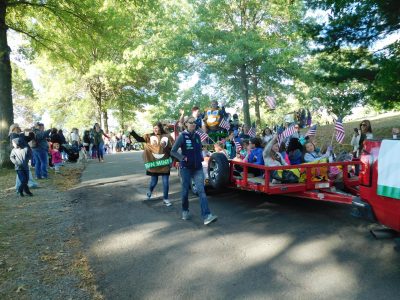 Photo by Robert A. DeFrank The Oglebayfest parade has a strong turnout, with schools, community organizations, and first responders and emergency services in the lineup. Doug Harrison, CEO of Wheeling Hospital, was the parade marshal.

WHEELING — Crowds turned out early along the paths at Oglebay Park to cheer on the festival’s morning parade as it set off from the Good Zoo.

John Hargleroad, who served as operations director for Oglebay Park for 46 years until his retirement four months ago, said Mother Nature was cooperating this year. He pointed out the light carpet of newly-fallen leaves carpeting the grass as the parade vehicles, floats, marchers and animals passed a crowd.

“It’s a perfect day for Oglebayfest. The temperatures are exactly right for a fall festival and the sun’s out. We have a nice crowd for the parade today and great participation,” he said.

He said a Healthnet helicopter was also scheduled to land near a shelter for viewing that day.

“This is the 42nd annual Oglebayfest. It was started 42 years ago to celebrate 50 years of operations at Oglebay. Now it’s 92 years old. People have been coming for years for miles around. Everybody looks forward to Oglebayfest,” David Lindelow, CEO of the Wheeling Park Commission and of Oglebay Park, said. “The best thing this year is the perfect weather. Last year was a little damp.”

Lindelow said thousands normally visit the event from near and far, and all are welcome.

“Fall is a time of festivals all around the country so the timing is perfect if you want to get out, enjoy the weather and enjoy the season,” he said.

He joined the ranks of community organizations and response agencies who participate in the parade. Lindelow said at least 40 units were a part of the parade.

Lindelow observed the festivalgoers dispersing after the parade to enjoy the other attractions and events featured. He said he expects a strong continuation from the opening Friday.

“We had a very strong kick-off yesterday. The artist market was jammed at noon (Friday) and was packed,” he said, adding the beer garden and shelters were also popular.

Michael Hires, member of the Oglebay Foundation coordinating the parade this year and last year, said he had no difficulty in finding participants.

“There is such community support for this event. We can count on every single fire department. Every single police department. Civic groups anywhere within the region come without hesitation. They really love this parade It’s a real community anchor for us,” Hires said. “This year we had two bands, and we’re really excited to have West Liberty University. We had maybe 15 fire trucks … and a lot of smaller civic groups; 4-H really came out with a really strong contingency this year. We’re real thrilled to have them.”

He also pointed out the presence of Boy Scouts and Girl Scouts.

Hires said he hoped visitors would check out the arts vendors, and the fireworks Saturday night. Tonight will feature a square dance.

The Ohio County Country Fair also is featured on the park premises, with booths related to agriculture and farming, and livestock on display. The Valley Grove Fire Department had equipment on display for children.

“We are very excited this year,” he said. “Participation in the Ohio County Country Fair is up this year. … We have a variety of animals people can come and see. … These are animals and farmers from our area. Come out and meet them. We have a 4-H tent with hands-on activities. We have a youth market here (for locally-grown fruits and vegetables). … The Ohio County Country Fair, we’re all about getting outdoors, having fun, and specifically fun for the whole family and kids. Our philosophy is learn by doing, and we do hands-on learning.”