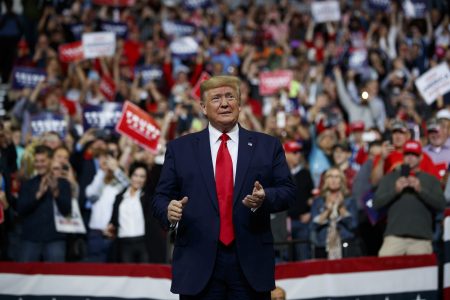 MINNEAPOLIS (AP) — President Donald Trump sought to convert the impeachment investigation in Washington into a political asset on the campaign trail, telling supporters at the first of three reelection rallies over the next eight days that Democrats want to “erase” their vote by removing him from office.

The Thursday night rally in Minneapolis was the first since Democrats began proceedings two weeks ago to remove him from office.

It served as a proving ground for the president as he tries to use the impeachment inquiry to energize supporters for his 2020 campaign.

He added, “The Democrats’ brazen attempt to overthrow our government will produce a backlash at the ballot box the likes of which they have never ever seen before in the history of this country.”

The rally, scheduled before House Speaker Nancy Pelosi, D-Calif., announced the impeachment investigation, came at a pivotal moment for Trump. His campaign strategy is focused on motivating his core supporters, rather than trying to win over a diminishing number of undecided voters, and the resonance of his appeal to the faithful may determine his second-term chances.

Trump has lashed out in acerbic tweets and public statements at Democrats, the media and even some Republicans as impeachment has dominated the national headlines. He has claimed that he is the victim of a “coup,” although impeachment is a constitutional process, and accused Democrats of trying to undo the 2016 election.

White House officials expected Trump to echo those themes in Minnesota, much as he tried to paint himself as the victim during special counsel Robert Mueller’s Russia investigation.

Polls show Americans’ support for removing him from office has ticked up since House Democrats launched the impeachment inquiry.

His GOP allies have launched a countrywide campaign to try to reverse that trend and inflict political pain on vulnerable Democrats who are supporting the House investigation.

Both Democrats and Republicans are tuned in to the symbolism of the moment.

The rally at Target Center, the city’s basketball arena, drew thousands of supporters as well as protesters outside. Trump was joined by Vice President Mike Pence, who had a separate schedule of appearances in the state Trump is trying to tip his way next year.

Pence told the crowd that Democrats have spent the last three years trying to “overturn” the 2016 result. “Now, Minnesota, it’s our time to fight for him,” he said.

Trump fell about 45,000 votes short of beating Democrat Hillary Clinton statewide in 2016. He has had staff in the state since June building a network to turn out supporters next November.

“We are going to win this state,” Trump said Thursday.

Attacks on the “socialist” wing of the Democratic Party are the heart of Trump’s plan to hold onto the Rust Belt and become the first Republican presidential candidate to carry Minnesota since Richard Nixon in 1972.

But the state has additional significance as the home of Rep. Ilhan Omar, the Somali-American lawmaker whom Trump often holds up as a symbol of the liberal shift in her party.

Trump has tweeted that Omar should “go back” to her home country if she wants to criticize the United States, and Trump supporters broke into chants of “Send her back!” at a rally this summer in North Carolina. Both incidents drew widespread condemnation from otherwise stalwart Trump supporters, who called the chants racist and urged the president to condemn them.

Some lawmakers, including Senate Majority Leader Mitch McConnell, R-Ky., and some of the president’s closest outside advisers privately warned Trump about the damage those chants could inflict on the GOP, according to four Republicans close to the White House who were not authorized to publicly discuss private conversations.

They believed the sight of thousands of mostly white attendees chanting “Send her back!” would dominate news coverage and turn off moderate voters, particularly women and suburban residents.

Trump has held four rallies since then. The chant has not erupted.

As he left the White House on Thursday, Trump suggested that the size of the crowd awaiting him at the Minneapolis arena is a sign that he will win the state in 2020 — with help from Omar. He said 80,000 people had requested tickets for the 20,000-seat venue.

“It’s amazing. We have a line right now in Minnesota that’s many blocks long,” Trump told reporters. “I think I can win Minnesota. I think Omar is helping us win in Minnesota and other places.”

Before Trump took the stage, his son Eric warmed up the crowd with an attack on Democratic frontrunners Elizabeth Warren and Joe Biden.

Trump has been pushing baseless claims that Biden and his son Hunter traded on the family name to earn millions from governments in Ukraine and China. Trump’s repeated call for Ukraine to investigate the Bidens is at the center of the impeachment inquiry.

The younger Trump asked the crowd for an assessment of how Hunter Biden is feeling and suggested that the familiar Trump rally chant of “Lock her up” — directed at Hillary Clinton — become “Lock him up” instead. The crowd then chanted, “Lock him up, lock him up.”

Trump’s adult children have faced congressional scrutiny for their business dealings while their father is serving as president.

Protesters converged on the arena hours before Trump’s appearance, eventually packing the streets surrounding it. Many blew brightly colored whistles handed out by fellow protesters, adding to the din of frequent chants like, “Lock him up! Lock him up! Lock him up!” — referring to Trump himself. Some clutched helium-filled balloons depicting Trump as a baby, similar to the famed Baby Trump balloon that flew above a nearby building.

“I’m a registered GOP member, and I’ve never been more ashamed of our party,” she said. “I didn’t vote for him.”

Inside the arena, Lori Glass, a longtime Republican from White Bear Lake, a Twin Cities suburb, dismissed the talking of impeachment with one word: “Ridiculous.”

“He’s done so much for the country,” she said, citing the economy as Trump’s top accomplishment. Democrats are pressing for impeachment because “they don’t have a good candidate,” she said.

On Friday, Trump planned a rally in Louisiana against Democratic Gov. John Bel Edwards. Aides said Trump is not endorsing one of the GOP candidates in the race before Saturday’s election to maximize the chances that Edwards falls below the 50 percent threshold needed to avoid a runoff.

Next week Trump is set to hold a rally in Dallas, a GOP stronghold in a state that has grown more competitive for Democrats in recent cycles.

At a White House event on Wednesday, Trump made it clear he was looking forward to Thursday’s rally in Minnesota.