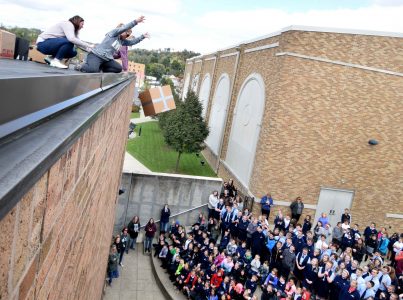 WHEELING — It was all about the double-boxing and duct tape technique that won it for the winning team during the ninth Annual St. Michael Parish School Pumpkin Drop Friday afternoon.

One by one, Interim Principal Kim Burge dropped nearly two-dozen pumpkins from the roof of the school building as the entire student body got to watch in excitement from the school’s outside amphitheater as each one went “plop!”

Students in fifth, sixth, seventh, and eighth grades have been working in small groups with their classmates and their science lab teacher Jessica Zwack to design containers to provide their pumpkin from being damaged in the drop.

The goal of the Pumpkin Drop competition is to design an enclosure or apparatus to protect a pumpkin from damage when dropped from the roof of the school building.

Six groups went on to participate in a second drop after their pumpkins were spared damage from the first round. Eventually, a sixth-grade team of five boys — Matt Criniti, Liam Shinn, Finn O’Connell, Luke McCabe, and Michael Steinigel — came away with the winning unscathed pumpkin. The boys said it was the double boxing that won it for them and they had a lot of fun competing in the challenge.

Burge, who has had the honor of dropping pumpkins each year since the competition began said it is a fun-filled educational challenge that might help inspire a future engineer, science teacher or any occupation inspired by science, technology, engineering and math (STEM).

“It has the academic aspect to it — where they have to figure out the masses and then we figure out the force of the pumpkin hitting the ground,” Zwack explained. “So it’s more than just dropping pumpkins off (the roof). They have to come up with a diagram and figure out a way to keep their pumpkins from cracking,”

In addition to the pumpkins not being more than 10 inches in diameter and both the pumpkin and protective structure weight being limited to 35 pounds or less — the school followed more than a dozen other West Virginia Mechanical and Aerospace Engineers rules for the competition. Some of the other rules included: the pumpkin may not be altered (no freezing or adding chemicals), the pumpkin must freefall in a designated drop zone and the package must be designed so that the pumpkin can be removed by the ground crew within 30 seconds after hitting the ground.

In addition, the protective structures were designed with public safety in mind and must be designed so that it does not cause damage to school property. The first, second, and third place winners were decided based on designated judges’ scores.