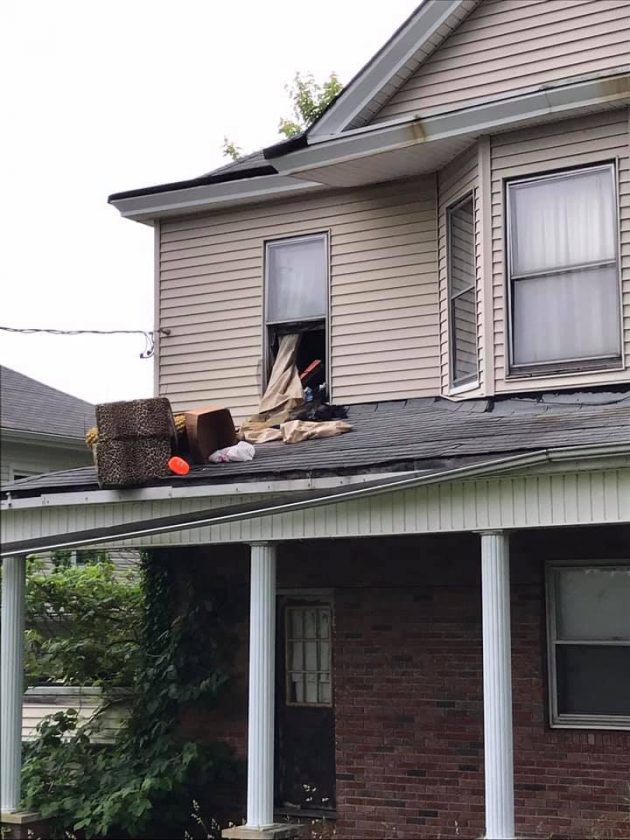 A photo taken in June by Megan and Ben Dunaway, who lost their home at 12 S. Frazier Ave. in a fire early Tuesday, shows the neighboring vacant house where the fire began. The property was in violation of Wheeling’s property maintenance code and was on a list of buildings to be demolished by the city.

WHEELING — A vacant house in the Mozart section of Wheeling that caught fire early Tuesday had been in violation of the city’s property maintenance code for more than a year and was slated for demolition.

The owner of the property at 10 S. Frazier Ave., Stephen Rodocker, was summoned to court in late 2018 regarding the violation and a warrant for his arrest was later issued, city officials said Tuesday.

The house was also on a list of properties to be demolished by the city, said Michelle Rejonis, Wheeling marketing and community relations specialist.

The fire destroyed the vacant house and a neighboring home at 12 S. Frazier Ave., and damaged a third one on the street. No injuries were reported.

The city sent Rodocker a letter in July 2018 indicating his property was in violation of Wheeling’s property maintenance code. The house was later condemned after the city conducted an exterior inspection.

In October 2018, Rodocker was summoned to court. He appeared once but failed to appear for subsequent court dates. A capias warrant for his arrest was issued in December.

The city also received a complaint regarding the property’s condition recently. In June, an initial Wheeling 311 ticket was submitted by a neighbor, and the complaint was assigned to building code personnel.

“On several occasions, one of the city’s building inspectors also had a verbal conversations with the neighbors and advised them of the status of this property with regard to city action,” Rejonis said.

Megan and Ben Dunaway, the couple who lost their house at 12 S. Frazier Ave. in the fire, submitted the complaint June 6 stating that the next-door property was vacant for years and presented a major health and safety risk. According to the complaint, the house had been subject to several break-ins in recent years, as well as rodents and other animals.

“I do not need to worry about disease from rodents affecting my family or the risk of a tragedy happening because of someone else’s neglect by living in close proximity to this abandoned house,” the couple wrote in the complaint. Megan Dunaway posted a copy of the complaint and photos of the vacant property on Facebook after the fire Tuesday. She also said that they never heard back from the city after they filed the complaint in June.

A fundraiser on the website GoFundMe titled “Dunaway House Fire – Emergency Fund” had garnered nearly $5,000 as of late Tuesday afternoon.

The Wheeling Fire Department is investigating the fire and its cause is still unknown, spokesman Philip Stahl said Tuesday afternoon.