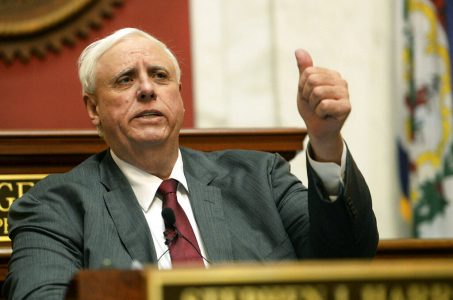 FILE - In this Jan. 9, 2019, file photo West Virginia Gov. Jim Justice delivers his State of the State address in the House of Delegates' Chamber in Charleston, W.Va. A family business of West Virginia’s billionaire governor has maxed out a taxpayer-funded subsidy program meant to help farmers through the U.S. trade war with China. Records reviewed by The Associated Press show Justice Farms of North Carolina took in tens of thousands of taxpayer dollars from the program earlier this year. (Chris Dorst/Charleston Gazette-Mail via AP, File)

LEWISBURG, W.Va. (AP) — A farming business owned by the family of West Virginia’s billionaire governor has received $125,000 in soybean and corn subsidies, the maximum allowed from a federal program meant to help American farmers through the U.S. trade war with China.

There is no evidence Gov. Jim Justice did anything illegal. But at least one analyst said the payments to the richest man in West Virginia are unseemly, given his wealth. And the subsidies have thrown the spotlight again on his business empire and the potential conflicts of interest it poses.

Records reviewed by The Associated Press show Justice Farms of North Carolina, owned by governor’s family, hit the program cap of $125,000 earlier this year and was the biggest recipient of soybean subsidies in West Virginia.

Justice, the richest person in the state, owns a complex business empire of coal and agricultural entities that are perennially mired in litigation, often over unpaid bills. The farming company is no different. It is named in a long-running lawsuit that alleges the Justice businesses transferred assets between them in an effort to avoid paying a debt.

The company took in $121,398 in subsidies for soybeans and $3,602 for corn for farms on property it owns in West Virginia, according to records provided to AP under the Freedom of Information Act. Both figures far exceed the program’s median payments: $6,438 for soybeans and $152 for corn.

President Donald Trump’s administration set up the Market Facilitation Program to help offset losses caused by tariffs, basing the payouts on bushels produced. The program does not require farms to demonstrate their operations have been damaged by the trade war.

Loopholes have allowed many large, moneyed farming operations to blow past the $125,000 cap, according to an AP analysis of the payments. Critics, including U.S. Sen. Charles Grassley, an Iowa Republican, have called for tighter oversight on where the taxpayer funds are funneled.

“We really think you should be subsidizing people who need the help. It doesn’t make a whole lot of sense for taxpayers to be providing billions of dollars to wealthy farmers who do not need the subsidies,” said Anne Weir Schechinger, a senior economic analyst at the Environmental Working Group, which tracks federal farm subsidy programs.

More subsidies for the Justice family company could be on the way. The administration has rolled out another $16 billion in aid for farmers hurt by the president’s trade policies but made some changes after criticism that large farming organizations were finding ways around the caps. Officials have increased the cap to $250,000 for the second round and payment calculations are based on acres planted and location instead of production.

Information on how the trade war has affected the Justice farms wasn’t available. Officials in Greenbrier County, home to the subsidized farms, declined to release the company’s agriculture data to the AP, as did the United States Department of Agriculture’s regional National Agricultural Statistics Service.

Justice’s government spokesman referred questions and an interview request to a representative for Justice’s companies, who issued a statement saying tens of thousands of farms and ranches with products “directly impacted” by Chinese tariffs received money under the subsidies.

“Justice Farms of North Carolina was one of more than 3,000 farms in that state alone, and nearly 40,000 farms and businesses nationwide, that received support from this program. It’s absurd for anyone to use this important program as the basis for cynical political attacks,” said Brian Walsh, a spokesman for the Justice companies.

Walsh did not detail losses suffered by Justice Farms of North Carolina in the U.S. trade war.

West Virginia property records show the company owns three farming properties and one residential building not far from a lavish resort the governor owns called The Greenbrier. The properties have a combined value of $1.87 million and span nearly 700 acres, with one including a full-size tennis court, according to state records.

The sprawling farms are nestled into a relatively flat stretch of land between sections of the Appalachian Mountains. On a recent visit, the farms were covered with rows upon rows of tall, dry stalks of corn.

County deed records in North Carolina, where the business is registered, show a dizzying series of property transfers between a Justice-owned entity, the James C. Justice Companies, and Justice Farms of North Carolina without any meaningful payment. The transactions, some involving just $10, are the subject of a federal lawsuit brought by a set of businesses that accuse the Justice companies of violating the RICO Act and masking their worth so they can skirt a debt. The suit seeks to force the companies to pay almost $17 million.

The business structure of Justice’s many companies has perplexed litigants as well as federal prosecutors. In June, the U.S. attorney for the southern district of West Virginia asked a judge to hold the Justice family accountable for a more than $1 million court-ordered sanction against one of their companies after deeming it a shell corporation. One of Justice’s other businesses quickly moved to pay the bill.

With a net worth estimated at $1.5 billion, Justice lists more than 100 business interests on his most recent financial disclosure form. When Justice became governor, he said he wanted to put his businesses in a blind trust but has not done so, causing criticism when his private and public roles intersect. 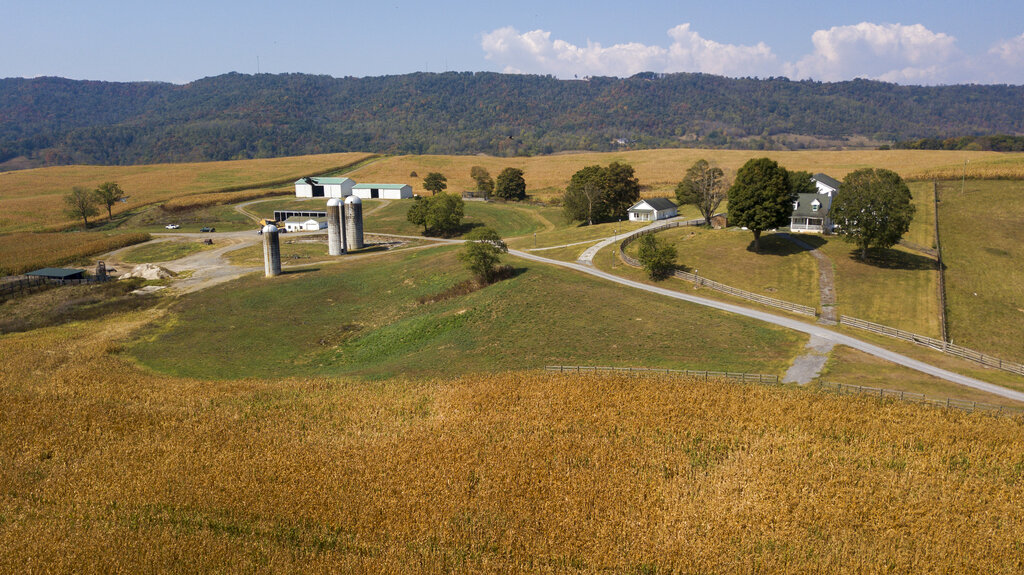 This Oct. 1, 2019 aerial photo shows farm buildings and a farm house surrounded by a crop of corn on a farm owned by the family of West Virginia Governor Jim Justice near Lewisburg, W.Va. Justice Farms of North Carolina raked in tens of thousands of taxpayer dollars under a subsidy program President Donald Trump set up to help farmers hurt by his trade war with China. (AP Photo/Steve Helber)

A prominent Republican state senator called for Justice to resign this summer after the U.S. government sued nearly two dozen of his coal businesses for failing to pay safety fines. Federal prosecutors in a public corruption unit have sent three subpoenas to his administration requesting information about his businesses and resort.

Justice has tried to put some distance between himself and his companies, saying his children control them. He has said the process of putting his businesses in a blind trust “has been slowed down by the multitude of financial institutions that work with my family’s companies.”

In the case of Justice Farms of North Carolina, the governor was listed as a manager in North Carolina business registry filings up until 2018, when his daughter’s name replaced his. The company has not been included in his financial disclosures filed with the ethics commission in West Virginia.