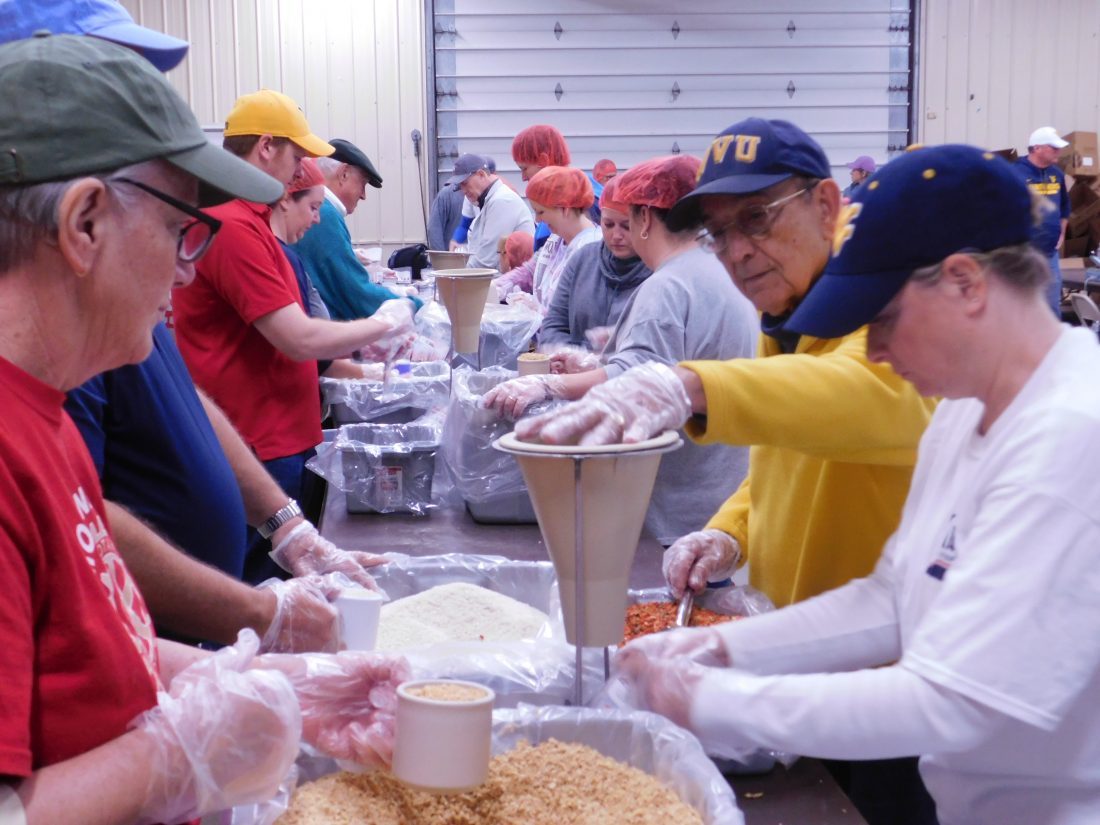 Photo by Robert A. DeFrank Volunteers from the Moundsville, Wheeling and New Martinsville rotary clubs pack more than 20,000 meals for needy children overseas Saturday at the Marshall County Fairgrounds as part of the Rise Against Hunger organization.

MOUNDSVILLE — Three local rotary clubs pooled their time and resources Saturday to pack more than 20,000 meals for the hungry living outside the country.

Close to 80 volunteers from the Moundsville, Wheeling and New Martinsville Rotary Clubs packed rice and other food into boxes at the Marshall County Fairgrounds.

Joey Kelly of the Pittsburgh office of Rise Against Hunger directed the food-packing. He said his organization has worked with the region’s rotary clubs separately before.“This is the first time they’ve done it as a group. There’s different rotaries represented here,” he said.

Kelly said Rise Against Hunger works with other non-government agencies in other countries to transport food to needy areas, particularly to children.

“A lot of these go to school lunches. … We partner all over the world. We partner with South America, Africa.”

Once a shipping container has been filled with 300,000 meals, it will be shipped.

Sharon Welsch, organizer with the Moundsville Rotary Club, said they believe they could accomplish more by pooling their energy and resources.

“We’re all in rotary together and wanted to do something in our area, and we all have been packing meals at the rotary district conference in May (at Oglebay Park).

Welsch said these projects mesh with the rotary clubs’ mission as a service-oriented organization, with activities such as soup kitchens and other local projects.

“Rotary’s motto is ‘Service above self,'” she said. “We do a lot of service activities in our community. … Rise Against Hunger is a way to just broaden that and do it all around the world.”

“This is a collaboration between the three of us,” Melynda Sampson from the Wheeling Rotary Club said. “Doing an assembly to get these bags filled and sealed and sent to the people that are in need. … We see people that have food security issues and we don’t want anybody to go hungry. … can you imagine going for days without a meal? That’s what drives us.”

After every 1,000 meals was packed, a volunteer struck a gong and the others raised a cheer before getting back to work.

Kelly said anyone interesting in getting involved or hosting a Rise Against Hunger Event may visit riseagainsthunger.org and ask for more information.