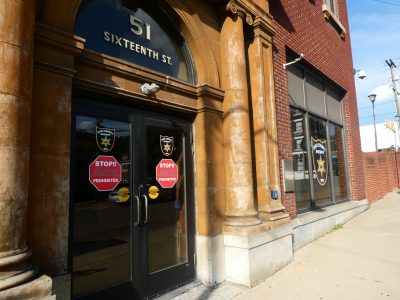 Photo by Joselyn King The city of Wheeling is considering the purchase of the AEP Building, located at 51 16th St. in downtown Wheeling.

WHEELING — Ohio County is offering the former AEP Building to the city of Wheeling as a future home for the space-challenged Wheeling Police Department.

If that happens, the Ohio County Sheriff’s Department would move to Wheeling’s current police station space in the City-County Building, according to Ohio County Commission President Tim McCormick.

The AEP Building, at 51 16th St., sits next door to the City-County Building. It is the current home of the Ohio County Sheriff’s Department, as well as other offices — including the Ohio County Family Court and West Virginia University Extension office. All would be relocated to the City-County Building if the city of Wheeling agrees to purchase, he said.

The city has been seeking a larger space for the police department, and city council recently voted to institute a user fee tax to help pay for the construction of a combined police and fire emergency services building.

If the city chooses to purchase the AEP Building for use as a stand alone police station headquarters, the much smaller Sheriff’s Department would be moved to the Wheeling Police Department’s current offices in the City-County Building, McCormick said. There are 26 deputies in Ohio County, and 64 officers currently on the Wheeling Police roster.

“Yes, it (the AEP Building) was offered, and the city took a tour,” McCormick said. “At this point, I don’t think they’ve given us any correspondence back as to what their thoughts were. We just offered it as such. Should they decide to go there, we will make arrangements to move the folks over here.”

“Everything is up in the air,” McCormick said. “It’s a possibility, if the city would want to use it — but a lot of variables are included.

“We could move everybody into the City-County Building. We don’t have near the numbers there are in the (city) police department, and I think we could make it work. We’re just brainstorming right now.”

McCormick said the city has not been given a price for the AEP Building, but he believes it would be “nominal.” Parking across from the building on the Eoff Street side might be part of the deal.

“They wanted to make sure it would work for the police department, but it is another building with issues,” he said. “If the parking is included, it could be a viable option.”

The city’s first preference, however, is to establish a combined building for the police and fire headquarters.

“But we will certainly consider separate locations,” Elliott said.

City Manager Robert Herron said talk about the AEP Building is “in a preliminary discussion stage.” He said the city does appreciate the offer from the Ohio County Commission as a possible option for the police department.

“A few weeks ago, our architect and engineer toured the AEP Building with the police chief, and I haven’t received a report back assessing the ability to convert it to a police headquarters,” he said. “I will wait until the report comes to analyze it. At the end of the day, it’s a big ‘if.'”