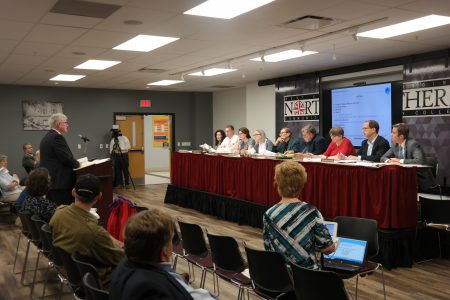 WHEELING — Members of the city’s Planning Commission asked developers questions Monday about their plans to construct a “mixed-use village” on a Woodsdale hilltop.

At the meeting, attended by about 60 people at West Virginia Northern Community College’s B&O Building, commissioners sought to clarify GC&P Development’s plans for the site and to determine what the body needs to consider. The commission ultimately moved to table the matter and requested that GC&P Development conduct a traffic impact study on the proposed development site, located along W.Va. 88 north of the Woodsdale neighborhood.

The company aims to create a 50- to 55-acre development on the hilltop with commercial, residential, office and institutional space as well as to improve the W.Va. 88 “corridor” near the site. The proposed village would include retail shops, office space, a grocery store, a movie theater and residential areas with townhouses and assisted living facilities.

The Planning Commission is considering whether to amend Wheeling’s 2014 comprehensive plan to create a special area plan to accommodate the proposed development. The 100-acre property is currently zoned residential and designated for conservation development.

Commissioners and representatives of GC&P development, including the firm’s counsel Michael Hooper, discussed what version of the developers’ plans the Planning Commission should consider. The company proposed eight different options, ranging from a full “mixed-use village” to solely commercial or residential developments.

City Solicitor Rosemary Humway-Warmuth said the commission should base its decisions on the mixed-use model that GC&P presented. If that isn’t approved, then the developers could return to the body with another plan, she said.

If the Planning Commission approves the amendment at a future meeting, it will next have to consider a zone change for the property and, finally, a site plan review.

The West Virginia Division of Highways sent the city a letter stating that the W.Va. 88 improvement project appears to be feasible, but a traffic impact study needs to be conducted for the DOH to make a full determination, said Tom Connelly, Wheeling assistant director of economic and community development.

Douglas Grayson, one of the co-owners of GC&P Development, argued that the traffic impact study, or TIS, wouldn’t be effective until later on in the process, when the developers know specifically what the property will be used for.

“Yes, we will do a TIS. I’m frustrated being asked to do it at a time when no developer has info necessary to make a reliable decision from it,” Grayson said. “For a TIS to be really good, it needs to be specific.”

When asked by Commissioner Howard Monroe who would pay for the W.Va. 88 improvements, Hooper said that the developers would prefer for others to pay that but they are prepared to make part of the investment. GC&P Development plans to negotiate that in the future, he said.

Councilwoman Wendy Scatterday, a commission member, noted that the city’s 2014 comprehensive plan defines the property’s designation, conservation development, as land maintained in a natural state to the maximum extent possible.

“This is what we’re working with, and if this process isn’t satisfactory, we can stop and wait until a different point in time when the plan is going to be up for review,” Scatterday said, noting that the plan is reviewed every 10 years. “This is the tool at our disposal.”

Another topic of discussion of the meeting was the amount of soil GC&P Development plans to remove from the hilltop — 9 million cubic yards.

“The applicant is asking to do an extraordinary thing with this property, asking to remove 9 million cubic yards,” Scatterday said. “That’s very significant, that’s very invasive.”

Scatterday said she has safety concerns about the proposed development and asked the developers whether they’re concerned about breaching a coal mine seam that lies on the property. A representative from the Thrasher Group, the engineering firm working on the project, said the developers are at a “very conceptual stage,” and that they recognize potential for an issue and will address it moving forward.

Commissioner Christina Schessler asked the developers whether they foresee the development would conflict with existing businesses in the region that might be struggling or barely making it. Grayson said he doesn’t think the village’s businesses would be equivalent to nearby businesses.

“We’re working hard to develop downtown, and I think we’re spreading our eggs out too far,” Schessler said.

Monroe countered that the Planning Commission should focus on land use rather than business sense, and Commissioner Martha Wright agreed. Scatterday, however, said that economic viability can relate to the viability of land use.

“We cannot tell a developer what we think is the highest best use because that’s outside our purview and expertise,” Wright said.

Chairman Jeff Mauck thanked residents for submitting comments to the commission and representatives of GC&P development for providing information. Hooper added that he’s willing to arrange a visit to the hilltop property for any city official or representative.

WHEELING — It happens nearly a month later than first scheduled, but West Virginians are set to go to the polls ... 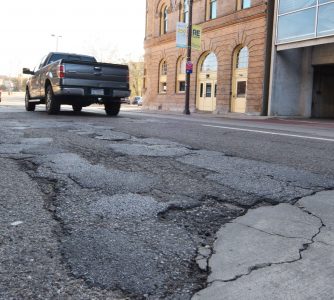 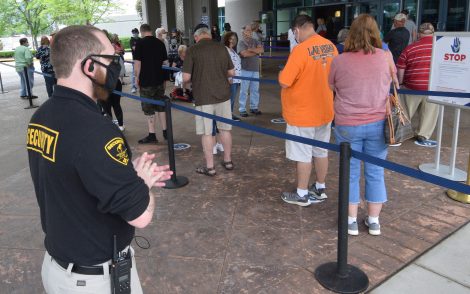 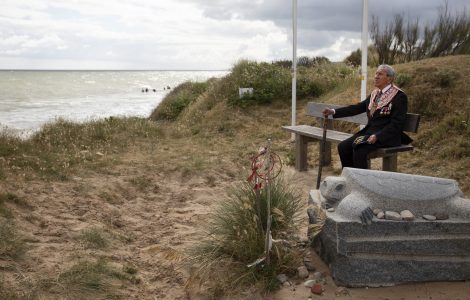 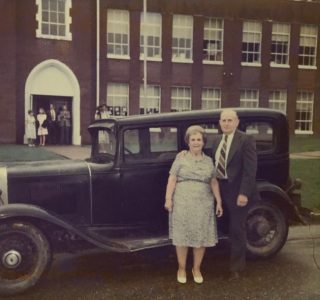