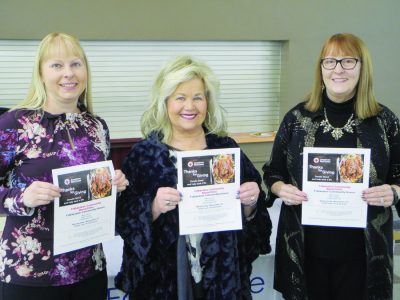 Organizers of a blood drive to be held by the American Red Cross and hosted by the Follansbee Chamber of Commerce say giving blood is a great way to express gratitude for the blessings of one’s life as Thanksgiving and the holiday season approach. Helping to promote the event, which will be held from 10 a.m. to 2 p.m. Nov. 27 at the Follansbee Community House, are, from left, Brandy Puskarich, the chamber’s vice president; Phyllis Riccadonna, account manager for the American Red Cross, Greater Alleghenies Region; and Chamber President Debbie Puskarich.

FOLLANSBEE — It’s been a busy year for the Follansbee Chamber of Commerce and its leaders not only aren’t done yet — they’re planning for next year.

Last week, Chamber President Debbie Puskarich reflected on the group’s many activities in 2019 as well as announcing upcoming events, including a blood drive hosted by the chamber for the American Red Cross on Nov. 27.

Phyllis Riccadonna, account manager for the American Red Cross, Greater Alleghenies Region; said the event, falling on the day before Thanksgiving Day, offers an excellent opportunity for people to express thanks for the blessings in their lives.

Doors will be open from 10 a.m. to 2 p.m., with a long-sleeved Red Cross T-shirt and, through the support of Suburban Propane, a $5 Amazon gift card to be given to donors while supplies last.

Riccadonna said walk-ins are welcome, but appointments can be scheduled by calling (800) 733-2767 or online at RedCrossBlood.org.

Puskarich noted the chamber is promoting patronizing small, locally owned businesses on Small Business Saturday on Nov. 30, and is encouraging everyone to visit the Maker’s Market being held by the Downtown Wellsburg group on Nov. 30.

A variety of craft, jewelry, candle and other vendors are expected to offer their wares from 10 a.m. to 5 p.m. at the former American Legion hall at 735 Charles St.

Puskarich said aside from an informal breakfast meeting on Dec. 9, the group will take a winter break while planning several events for 2020.

She said turnout for free concerts held by the chamber at Follansbee Park was tremendous and they will return next summer on May 24, June 22, July 27 and Aug. 24.

Puskarich added Monica Rotellini of Mo’s on Main, a strong supporter of sidewalk sales organized by the chamber, has agreed to coordinate three next year.

The sales are set for June 20, July 18 and Aug. 15 and plans call for them to include live music and such themes as West Virginia Day and back to school.

Puskarich said possibly the chamber’s most successful event this year was the job fair held with support from JSW USA and the involvement of several industries and other businesses as well as local colleges and the Northern Panhandle Workforce Development Board.

She said the event was spurred by the layoff of about 80 Koppers employees but attended by many more who lined more than a block of Main Street to see potential employers inside Vito’s 2 Catering.

“It was just an amazing event. People were able to submit resumes there, and some were hired on the spot,” said Puskarich, adding, “It was a very positive thing, so we’ll be doing it again.”

She announced next year’s event will be held from 9 a.m. to noon July 18 and due to this year’s huge response, at a larger location, St. Francis Centre.

In related business, Puskarich thanked Jim DeMundo, the hall’s caterer, for his response in meeting the chamber’s needs; and Follansbee Presbyterian Church for providing a meeting place for the group.

She also acknowledged the efforts of the chamber’s officers, board members and membership for their efforts during the year.