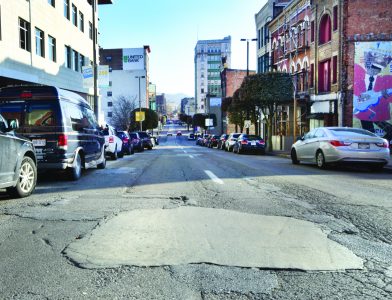 Photos by Scott McCloskey A project to replace streets and sidewalks on much of Main and Market streets is on hold after Wheeling officials did not receive a federal BUILD grant last week.

WHEELING — City planners had big plans for a federal grant to repair heavily trafficked and damaged roads in Wheeling, but that funding never came, sending officials back to the drawing board.

Wheeling Mayor Glenn Elliott said Friday that the city’s federal grant application request, just shy of $16 million, went instead to widening work on Interstate 64, which passes through central parts of West Virginia, including Huntington and Charleston. However, Elliott said he and other city officials will be heading to Charleston soon to discuss the possibility of receiving state funding which would have otherwise gone to I-64.

“There were 666 applications around the country, and 55 awards were made — unfortunately, we’re not one,” Elliott said. “West Virginia did get one award, and we (Wheeling) were hoping we’d get the other, but it didn’t come through.

“We’re in discussions with the Division of Highways right now to see what gap in the project they’re able to fill,” he said. “Our hope is to go forward with the project either way next year due to the condition of the roads and the sidewalks.”

The I-64 project, which is to widen the highway from Nitro to St. Albans, received $20 million. The maximum for any single project was $25 million, and each state could receive up to $90 million in total, though West Virginia only received funding for that one project.

Elliott said road work is a frequent request, but fixing the road would come with strings attached, if federal funding was used, as such work would also need to make the sidewalks handicap accessible.

The streetscape project was originally supposed to cost $8.7 million, but the price rose because of several factors, Elliott has previously said, eventually reaching around $19 million. The project would replace streets and sidewalks on much of Main and Market streets and pave portions of Chapline and Eoff streets that connect to the W.Va. 2 through ramps. It also would add new traffic signals, enhanced tree placement, curb bump-outs for better pedestrian access and more prominent crosswalks.

With only about one-quarter of the money needed for the project in their coffers, city officials now will have to scale back the plan.

“It’s complicated — some people say ‘Just fix the roads,’ but it’s all interconnected. If we fix the roads with federal dollars, we have to fix the sidewalks for (Americans with Disabilities Act) issues, and if you most the sidewalks, you have to change the signals. It’s all connected projects.

“Our hope is to figure out how much of that gap the Division of Highways can help us fill, and then re-scope the project and get it started next year. … Our intention is not to wait, to go forward with it as best we can, given the condition of those roads.”

Elliott said the city would need to step back and approach the state, to see if new funding would be available that would have gone to the Interstate project.

“It depends a lot on how much of the gap the state is going to step up with. The state got $20 million from the BUILD grant on I-64, so our hope is that gives them some flexibility on its other funding that was going to go to that project can now help us out, but that has yet to be determined. We’re going to be going to Charleston sometime soon to have those conversations down there,” Elliott said.