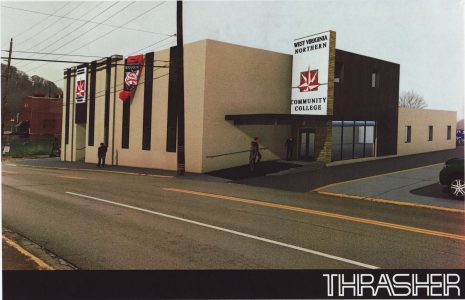 A rendering of the building on Lee Avenue in Weirton shows plans for the exterior of the new training center to be operated by West Virginia Northern Community College.

WEIRTON — Along with the rise of new industries in the region comes a need to educate those hoping to find employment through the jobs being created in the Ohio Valley.

A project announced this week is aimed at helping meet some of that need with the creation of a new training center in downtown Weirton.

U.S. Sen. Joe Manchin, D-W.Va., joined officials with West Virginia Northern Community College and the Business Development Corp. of the Northern Panhandle to unveil plans for the new center, to be located at 114 Lee Ave.

Current plans are to begin by offering welding programs at the new training center, which will be operated by WVNCC.

Noting there is a high demand for welders across the country, Manchin said it will be a perfect way for the training center to start, by making sure people receive the training they need for the jobs that are available.

“We know everyone who goes through this certification will get a job,” Manchin said.

The floor plan for the project indicates a welding area with 20 workstations, a space for tool and equipment storage, as well as flex space and men’s and women’s locker rooms. There also will be office space, a classroom and conference area.

The project will require the construction of a new entrance area, with indications of the installation of an elevator.

Larry Tackett, vice president of economic and workforce development at WVNCC, noted the new training center will provide full academic opportunities, including one- and two-year certification and degree programs, as well as short-term training.

He also noted the building will allow the addition of training programs for other skills in the future.

As previously announced, the BDC also had acquired the neighboring property fronting on Main Street known as the Magnone Building. That structure will be torn down to provide parking for the training center.

Swartzmiller estimated the project to cost around $3 million.