Interstate 70 ‘Crossovers’ to Begin This Week 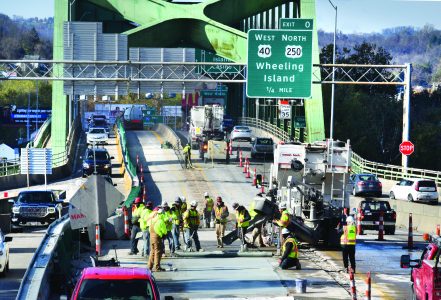 WHEELING — With the I-70 Bridges Project ramping up between the Wheeling Tunnel and the Bridgeport Exit and the recent closure of the Wheeling Suspension Bridge, frustration continues to grow for Wheeling Island residents who believe the West Virginia Division of Highways should have better planned both projects.

Not only are Island residents expressing concerns about the closure of the suspension bridge, they are also worried about traffic being converted to one lane on I-70 in that area once the anticipated “crossovers” are put into effect this week.

DOH officials announced Friday the crossover of I-70 westbound traffic onto I-70 eastbound between the Wheeling Tunnel and the Marion Street Exit in Bridgeport is expected to be implemented on Monday. Crews with Swank Construction, the general contractor for the I-70 Bridges Project, have continued working on preparation work for the crossovers in recent weeks. This traffic pattern is expected to remain in place throughout the first phase of the I-70 Bridges contract, with an anticipated duration of approximately 18 months which includes the eastbound work.

Wheeling Island residents say the traffic situation as been “horrible” in recent weeks and they believe it will continue to worsen once the crossovers are implemented this week.

Virginia Street resident Bill Seabright said he is “very frustrated” with not only the ongoing traffic situation surrounding the island, but how everything has been handled with the closing of the Suspension Bridge.

“This bridge needs to be open. It was open for six weeks and when the Friends of Wheeling came over and did their survey, all of the sudden we shut it down,” he explained.

He said while he has “all of the respect” for the Wheeling Police Department, he is extremely frustrated with how he believes Police Chief Shawn Schwertfeger and DOH have dealt with the situation. Seabright said he believes Schwertfeger should have let more police patrols monitor the bridge entrances and ticket motorists who were in violation of the bridge’s two-ton weight limit on a daily basis.

“They could lower that barrier down … and let the small cars and small SUVs go across this bridge. It’s sad what ‘s going on.” he added.

In addition to closing the suspension bridge, Seabright said he believes the traffic situation on I-70 near the Wheeling Island on and off ramps is a “scary” situation with the daily congestion of traffic.

“So far, I’ve been very fortunate there,” he added.

Island resident Floyd Yost agrees with Seabright about the traffic situation on I-70, and pointed out that it helps when motorists traveling I-70 offer the “courtesy” of letting motorists coming from the island into the line of traffic when everything is backed up.

Island resident Blanche Kaminski said with the recent closure of the suspension bridge, the traffic situation surrounding the island has been “bad.”

“I don’t think it would hurt just to open it to cars under a certain amount (weight), and pay somebody to sit at both ends,” she added.

Maryland Street Resident Ronnie Howard said he has also been very “frustrated” with the ongoing traffic situation surrounding the island.

“It’s getting terrible. Everybody is upset about it and the state is not doing anything about it,” Howard said. “They could have fixed that suspension bridge a long time ago, but no, they want to close it down now while we got a major road project going,” he added.

Howard said residents are also concerned about how police and emergency response time might be affected to the island in the event there is a traffic accident in the westbound lane of I-70 on the Fort Henry Bridge.

Motorists are advised to be alert for changing traffic patterns and expect delays. Any questions or concerns regarding the I-70 Bridges Project can be directed to the DOH hotline at 304-810-3214.