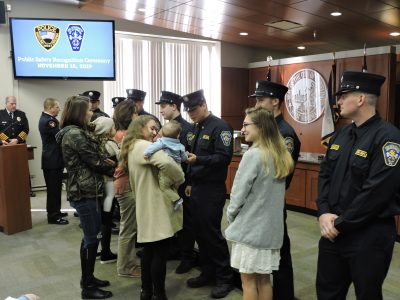 Photos by Alan Olson Numerous fire personnel are recognized for meritorious performance, as their loved ones pin medals to their lapels.

WHEELING — Wheeling’s police and fire personnel were recognized for their work, the lives they’ve saved and the end of some long careers at a ceremony Friday.

The Public Safety Recognition Ceremony saw the chiefs of the police and fire departments recognize the employees for their work, whether it meant helping dozens or just one person.

The entire fire department was honored by Fire Chief Larry Helms for their work on Jan. 31, when the Ziegenfelder Frozen Treat Co. building burned for several frigid morning hours.

“This was a full-department effort,” Helms said. “At 10:37 a.m., we responded to the Ziegenfelder fire, a challenge on many levels, due to the scope of the fire and the weather conditions. … The first alarm was faced with many obstacles, first being the temperatures at or below zero, second being the wind chill was -25, and third, when they changed (gear) they were exposed for several hours to the wind chill.”

Additionally, three men were recognized for their lifesaving effort, including Lt. Nick Brown and fire engineer Dennis Vankirk, who were in the unusual situation of delivering a baby during a medical call. Fire engineer Thomas McKenzie was also recognized for his effort in administering CPR to a man who had collapsed at the YMCA at 5:30 a.m.

At the time, he was off-duty, and the man was said to have recovered after hospitalization.

Of the police department, chief Shawn Schwertfeger recognized Cpl. Jason Hupp for his compassion during a January call where a man was found walking down a street in Wheeling Island. The man was found to have been cutting at his wrists with a knife, and Hupp approached the man, disarming him and taking him to a hospital for treatment. Hupp then stayed with the man to discuss his problems after the incident.

“The subject later admitted that if not for Cpl. Hupp, his intervention and even more so, his compassion, he would have continued to cut himself until he died,” Schwertfeger said. “It is a skilled officer who can see to the extreme of someone actively trying to kill himself, tackle that issue and then speak in a calm and soothing person to get that person the help that he needs. There’s no doubt in my mind that that person would have been a suicide, had it not been for your lifesaving effort.”

Additionally, Patrolman Kevin Cowan was also recognized for running to assist several children on the porch of a house during a structure fire. While the parents checked the house, Cowan — who had been assigned to traffic control during the blaze — went up to the front of the house to comfort and assist the children.

Numerous other police and fire personnel were recognized for their efforts, as well.