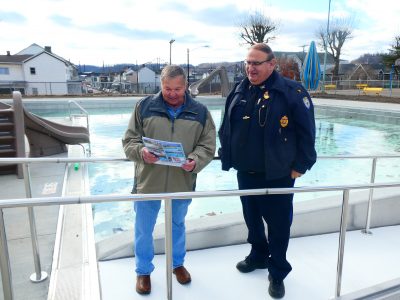 Benwood Mayor Ed Kuca, left, and Police Chief Frank Longwell stand alongside the city’s recently rehabilitated pool. They look over information provided to them by the contractor, Astro Pool Co. of Mansfield, Ohio.

BENWOOD — The new Benwood pool is holding water, but city officials say its rehabilitation cost about $2 million — more than double the anticipated price.

It may be December, but the pool is currently filled with water as they watch for any leaks. It is 100 percent complete, and will be open next spring, according to Mayor Ed Kuca.

The pool was constructed in 1973 with cast iron sides, and these have now been replaced with stainless steel.

Residents had wanted the baby pool adjacent to the pool to remain as part of the rehabilitation, but that was not meant to be.

“The baby pool was in worse shape than we thought,” Kuca said. “Its concrete bottom was deteriorating beyond repair. The pipe had several holes in them, and we were losing water.”

Now, rather than having a baby pool, Benwood residents will get an oversize splash area — an area where children can run through bursts of water shooting up from the ground, or have water from a bucket atop a pole shower down on them.

There is an advantage to having the splash pad, according to Kuca.

The Benwood pool typically closes early each year in mid-August due to the lifeguards having to return to school. No lifeguard is needed for the splash pad, and it can be left in operation as long as there is warm weather in late August and September, he said.

Benwood received a $400,000 grants from the U.S. Department of Interior’s Land and Water Conservation Fund to make major upgrades to the city’s pool, with the initial budget for the work set at $800,000.

The price to redo the plumbing and tear out the baby pool bumped the total price of the project up to close to $2 million, with 25 percent of the cost attributed to engineering and design.

Astro Pool Co. of Mansfield, Ohio did the pool work and is presently completing the splash pad at Benwood’s park. The cost of the splash pad alone was $200,000, and the city purchased a new diving board for $6,000.

Police Chief Frank Longwell said Benwood couldn’t do such projects without the city’s industrial base, and the business and occupation tax they pay. Most years, Benwood runs a $400,000 surplus, according to Longwell.

“We use our excesses in the city, and the whole town gets something,” he said. “We put the money into the pool, buying a street sweeper, the community center — places where the whole town benefits.”

Kuca said Benwood’s pool isn’t just used by those who live in the city, but also attracts visitors from other communities — even those living across the river in Shadyside, Bellaire and Martins Ferry.