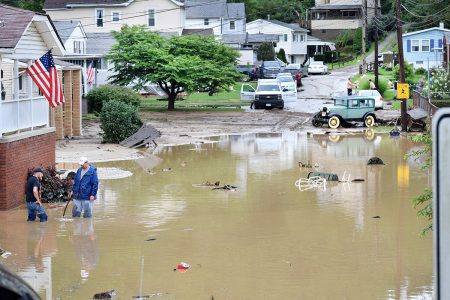 Flooding devastated parts of McMechen in July 2017, which is still being rebuilt in some places. The city’s Wastewater Sewer Treatment Plant received a $1.4 million federal grant to assist in repairs.

McMECHEN — McMechen’s Wastewater Sewer Treatment Plant, damaged in a 2017 flood, is to receive more than a million dollars in funding from the Federal Emergency Management Agency.

On Wednesday, the West Virginia Division of Homeland Security and Emergency Management announced that it had received $1,473,380 in response to the July 2017 Presidential Major Disaster Declaration, which came after heavy rains devastated parts of McMechen, among other parts of the state. Statewide, 793 residences were said to be impacted by the floods, causing an estimated $5.7 million in damage, and an additional $8.5 million in public assistance costs.

“This funding makes permanent repairs to the wastewater treatment system possible,” DHSEM Director Mike Todorovich said. “This is a major step toward making lasting improvements to services in McMechen, both now and in the future.”

During the July 28-29 flood, West Virginia National Guard members and equipment were brought in to help clean up the muck and debris which choked several McMechen streets. Cleanup took months, in the parts of town affected the worst. Elsewhere in the valley, two people, Page Gellner and Michael Grow, lost their lives when their vehicle was swept into Peter’s Run by fast-moving floodwater.

McMechen’s emergency services had been temporarily overwhelmed by the volume of calls and the scope of the damage, but Benwood and Moundsville EMS helped to cover their calls during that time. Marshall County Office of Emergency Management was also a constant presence during the floods.

Marshall County OEM Director Tom Hart and McMechen city officials could not be reached for comment on the grant Wednesday.

Volunteers from within and without the community gathered in McMechen for weeks after the flood, helping clean out houses — an arduous task which involved copious amounts of bleach and disinfectant, remove debris from basements and roadways, and house and feed displaced residents. In addition to local faith and civic groups, Praying Pelicans Missions brought aid from as far as Minnesota, Kansas and beyond to offer home-cooked meals to the victims.

FEMA recovery centers were also established to assist homeowners in applying for aid and filling out paperwork.

Gov. Jim Justice requested a major disaster declaration on Aug. 11, which was granted a week later by President Donald Trump.