City plans to sell property for a ‘nominal fee’ 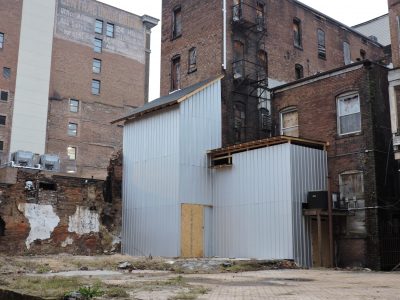 The city spent approximately $49,000 on necessary renovations to the rear of the building at 1437 Market.

WHEELING — The city has spent $49,000 fixing up a property it plans to sell for a nominal fee as council nears the second reading of the ordinance transferring ownership to a pair of Arizona developers.

First reading for the ordinance transferring the property at 1425, 1429, 1433 and 1437 Market Street was approved at Tuesday’s meeting. The property is to be sold to Arizona-based couple Ryan and Nikki Stoker.

The Stokers had previously said they plan to rehabilitate the structures.

Mayor Glenn Elliott had previously said the ordinance was crafted to allow the developers time to demonstrate their ability to revitalize the buildings.

“This may be the last realistic chance that these four historically significant buildings have,” Elliott said in October. “If we do nothing, we will quickly reach a point where demolition by the city is the only viable option.”

Ahead of the sale, the city spent approximately $49,000 on necessary renovations to the rear of the building at 1437 Market, city manager Bob Herron said Friday.

The Stokers submitted a proposal to the Development Committee in September. They aim to purchase the buildings from the city for a nominal fee and would spend $500,000 to $600,000 on the initial phases of the project, Ryan Stoker said previously.

The agreement will be structured so that if the developers meet certain benchmarks over the next year to 18 months, the city will contribute money otherwise scheduled for demolition toward roof replacement for 1437 and 1429 Market St.

Though in poor condition, the buildings were determined to be structurally sound enough to conduct repairs, largely due to the quality of timber and strength of masonry used when they were built in the late 19th century. The buildings require various repairs, such as major structural work and roof replacements. Ryan Stoker said he first plans to replace wall studs with galvanized steel in 1429 Market Street, which has seen major water saturation, and improve the buildings’ facades.

The Stokers had said they plan to develop the lower floors of the buildings into retail space and the upper floors into apartments. They also plan to open their businesses — a med spa and a furniture business — on the site.

From the city’s perspective, Elliott said, restoring the properties with retail and apartments would generate additional sales, property and business and occupation tax revenue. It would also preserve an important part of downtown Wheeling in the same block where West Virginia Independence Hall stands, he said.