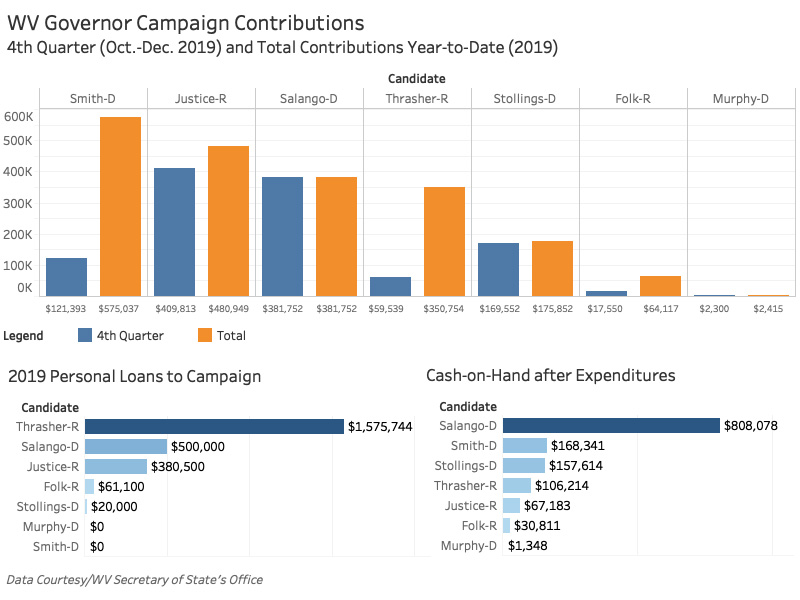 CHARLESTON — Several Republican and Democratic candidates for governor of West Virginia ended 2019 with thousands of dollars in campaign contributions going into the candidate filing period starting Monday. Campaign finance reports for the 4th quarter of 2019 — covering campaign contributions from Oct. 1 to Dec. 31 — were due Jan. 7 by midnight.

All candidates are precandidates, allowing potential candidates for office to test the waters and start fundraising efforts prior to the candidate filing period that starts Monday, Jan. 13, for the primary election filing period. Any precandidate who receives more than $500 in campaign donations must submit the annual report to the West Virginia Secretary of State’s Office.

Gov. Jim Justice, who is in the fourth year of his first term as governor, was able to raise $409,833 during the quarter — the best fundraising numbers of the year. Of that amount, $14,485 came from small-dollar donations of $250 or less; and $51,485 came from donations above the $250 threshold, requiring stricter disclosure requirements.

Another $192,454 was raised — after expenses — from an Oct. 17 fundraiser at Justice’s Greenbrier Resort with Donald Trump Jr. and Kimberly Guilfoyle. A Huntington fundraiser Nov. 26 – two days before Thanksgiving – raised $25,612 after expenses. On Oct. 24, the Justice campaign held a fundraiser in Clarksburg, bringing in $106,835 after expenses.

One notable donation from that event was $2,800 from Larry Puccio, former chief of staff to former secretary of state and governor Joe Manchin, former chairman of the West Virginia Democratic Party, former campaign chairman for Justice’s 2016 Democratic Party run for governor, and chairman of Justice’s transition committee. Puccio has also served as a lobbyist for the Greenbrier Resort.

Woody Thrasher, co-owner of the engineering firm The Thrasher Group and a former cabinet secretary in the Justice administration before being forced to resign, has loaned his campaign nearly $1.6 million as of the end of 2019 – $917,000 in just the 4th quarter alone. His campaign haul for the quarter came in at $59,939. After expenses, Thrasher is sitting on $106,204 in cash-on-hand.

Of his 4th quarter fundraising numbers, $5,989 came from small-dollar donors, while $52,489 came from large-dollar donors. Thrasher, also a former Democrat before switching parties to Republican last spring, held only one fundraiser in Charleston, bringing in $6,650.

“Woody has been hard at work since day one, connecting with thousands of Republicans all over the state and focusing on proving his character and his values,” said Ann Ali, communications director for the Thrasher campaign. “It’s no surprise to us that so many of these folks are confirming their belief in Woody’s message by choosing to donate to the campaign, even without substantial fundraising efforts on his part thus far.”

Recent internal polling from the Thrasher campaign puts him gaining on Justice. In that mid-December poll, Justice had 38 percent of the likely Republican primary voters polled, compared to 30 percent for Thrasher. However, the independent West Virginia Poll sponsored by WV MetroNews — conducted in early December — had Justice at 56 percent and Thrasher at 20 percent. Roman Stauffer, campaign manager for Justice, said Thrasher’s effort to buy the race wasn’t working.

“Despite spending nearly $2 million, Woody Thrasher trails Governor Justice by 36 points according to West Virginia MetroNews polling released in mid- December,” said Stauffer. “The question is, will Woody Thrasher continue to burn millions more of his own money, or will he acknowledge he has no path forward and drop out of this race?”

“We raised more money in the last three weeks of December through small-dollar contributions than the first part of the quarter,” Folk said. “The momentum is continuing in January. This is truly a grassroots campaign, backed by the people of West Virginia. My message of free market principles, fiscal responsibility, constitutional principles, and putting West Virginians first is gaining momentum; providing West Virginians a real choice, not an echo, in the Republican primary.”

On the Democratic side, community organizer Stephen Smith and the West Virginia Can’t Wait movement continue to break records in small-dollar donations.

Smith, the former director of the WV Healthy Kids and Families Coalition and a founder of Our Children Our Future, raised $121,393 for the 4th quarter, bring his total contributions for 2019 to $575,037.

Most of that was raised from more than 7,000 small-dollar donations, breaking a record set by former secretary of state Natalie Tennant during her primary campaign for governor in a special election after Manchin resigned to fill the unexpired term of the late U.S. Sen. Robert C. Byrd. Smith is sitting on $395,996 in cash-on-hand.

Of Smith’s campaign contributions during the quarter, $41,288 came from small-dollar donors. Another $90,588 came from large-dollar donors. Smith also held 19 fundraisers between October and December, including one in Pittsburgh, Pa., and one in Washington, D.C.

Even though Smith has been campaigning for governor since November 2018, Kanawha County Commissioner Ben Salango has already caught up after filing his precandidacy papers nearly 80 days ago.

“This is just the beginning of a strong campaign that will have the resources to defeat Jim Justice,” said Grant Herring, campaign manager for Salango. “The early fundraising success demonstrates that Ben Salango is gaining support all over West Virginia. As voters learn about Ben, his accomplishments, and his forward-thinking vision, they are excited to back a candidate who has their best interests at heart and can beat Jim Justice.”

“We’re building a strong campaign, a campaign that can actually defeat Jim Justice,” Salango said in a video to supporters. “This is just the beginning.”

Another candidate for governor who joined the race late was state Sen. Ron Stollings, a doctor from Boone County who filed on Sept. 23. Stollings brought in $169,552 in donations for the quarter and loaned his campaign $20,000. After expenses, Stollings has $157,614 in cash-on-hand.

“I think we had a strong quarter,” said George Manahan, a spokesperson for the Stollings campaign. “We’re very competitive and we’re put up fundraising every day. We’re excited.”

Manahan said Salango’s fundraising appear larger than what they really are because some donors donated $5,600. The new campaign finance law passed last year by the Legislature allows candidates to raise $5,600, but they can only use half for the primary and half for the general. This rule mirrors federal campaign finance statutes.

“When you look at Salango’s financial report, $14,000 of that Salango can’t use until the fall,” Manahan said.

Bringing up the rear among the Democratic candidates was former Pleasants County economic development official Jody Murphy, who raised $2,300 during the quarter and has $1,348 in cash-on-hand after his campaign account spent the last two quarters in the negative.

“Obviously, I have a long way to go, but I remain committed to my campaign, my ideas and working West Virginians,” Murphy said. “Keep in mind, I haven’t asked anyone for a dime. But that will change. I’m going start asking for funds and support. Asking people to invest in me and my ideas for the future of West Virginia.”

The official candidate filing period to be on the May 12 primary ballot starts Monday and ends at midnight on Jan. 25. Candidates seeking statewide office can either file in person at the Secretary of State’s Office’s in Charleston, Clarksburg, and Martinsburg, or mail in their certificate of candidacy.