Work will help DOH officials determine how to maintain span 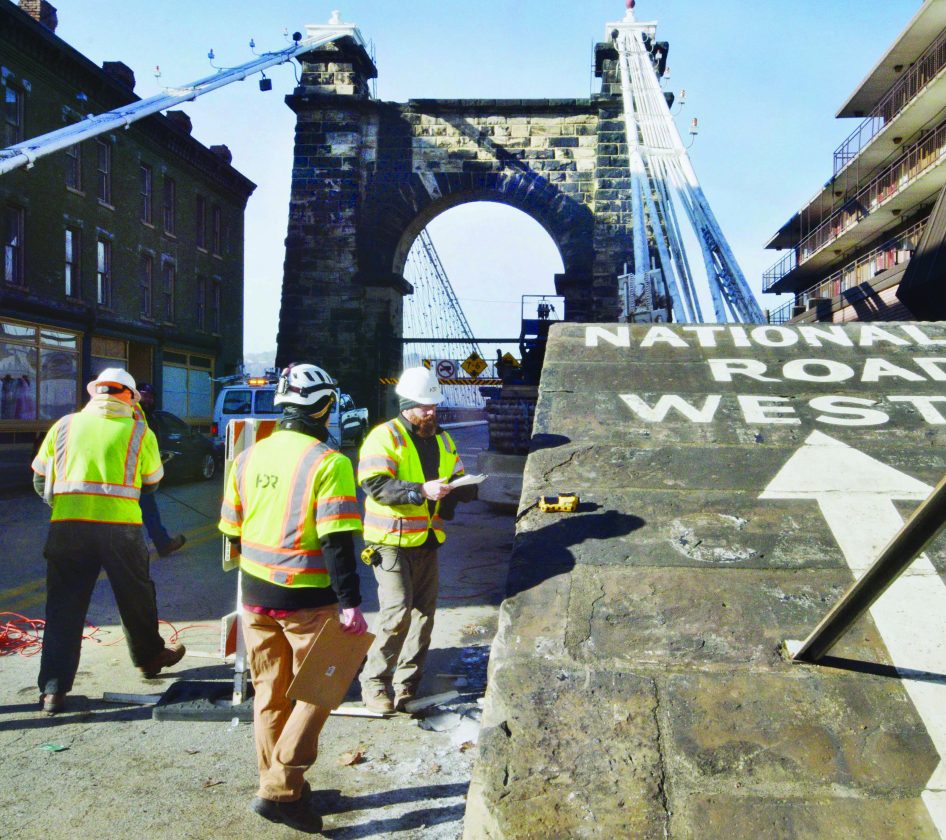 Crews with HDR Engineering of Weirton inspected the northeast vault of the Wheeling Suspension Bridge this past week and took underground core samples.

WHEELING — Crews with HDR Engineering of Weirton have been inspecting the northeast vault of the Wheeling Suspension Bridge and taking underground core samples in the surrounding area to help West Virginia Division of Highway officials study options for maintaining the structural integrity of the historic span.

The crews were drilling and taking underground samples around the vault located at 10th and Main streets over the past week seeking to find areas of bedrock.

Tony Clark, District 6 acting engineer for the DOH, said crews are taking core samples in that location in an effort to study the area around those “anchorages.”

Clark said while he still isn’t aware of the specifics of what HDR is investigating, he said there are “known deficiencies in the northeast anchorages” of the bridge as other recent inspections uncovered about the structure. He said the findings from HDR will be part of moving forward with a scheduled rehabilitation project for the structure that is expected to begin this fall or next spring, depending on the contractor’s schedule.

HDR is the company that regularly performs annual safety inspections on the structure.

“There’s no other way to investigate it than to take core samples to see what’s down there, and part of the rehabilitation work involves work on those anchorages, and work on the foundation of where those cables come in,” Clark explained. “That just standard practice to do that kind of investigative work to try and make their plan as clear as possible … and to make sure there’s not more substructure repairs that need made to shore up the bridge,” he added.

Clark said one thing that’s not visible is the depth of the anchorages to the bridge.

“There’s the main cables that support the bridge itself and then there are sway cables that goes off diagonally and that’s to keep the bridge … from swaying back and forth,” he added.

At a recent meeting with Wheeling Island residents about the bridge, Clark and several other DOH officials explained that while they still don’t know what the long-term plan is for the historic structure — including whether it will ever be reopened to vehicular traffic — they recognize it is an important structure historically.

More than 75 people turned out at the town hall style meeting as the Wheeling Island Community Association held the event along with DOH officials as a way to start a proactive conversation about the future of the structure after it was closed indefinitely to vehicular traffic in September. Clark couldn’t say for sure whether the span would ever be opened to vehicular traffic again, but he told the crowd that under the current plan, the rehabilitation project is expected to begin later this year or early next year. He said while there still some unknowns about the condition of the bridge — they plan to move forward with renovation project.

Following the meeting, Clark said once the project begins it is expected to take approximately “two construction seasons” to complete. He said March through October is considered a construction season. He also emphasized at the meeting that even with the completion of the rehabilitation project, the weight limit for the span will not increase.

“Based on that (Wheeling Island) public meeting, we are re-evaluating if there’s something we can do in the interim — but that’s still being evaluated. As of now no decisions have been made,” he added.

The bridge was first closed to vehicle traffic on June 29, when a Coach USA Lenzer bus exceeding the bridge’s 2-ton weight limit crossed the bridge, causing damage to the structure. It was reopened and closed several times, before it was closed indefinitely in the fall to vehicular traffic.