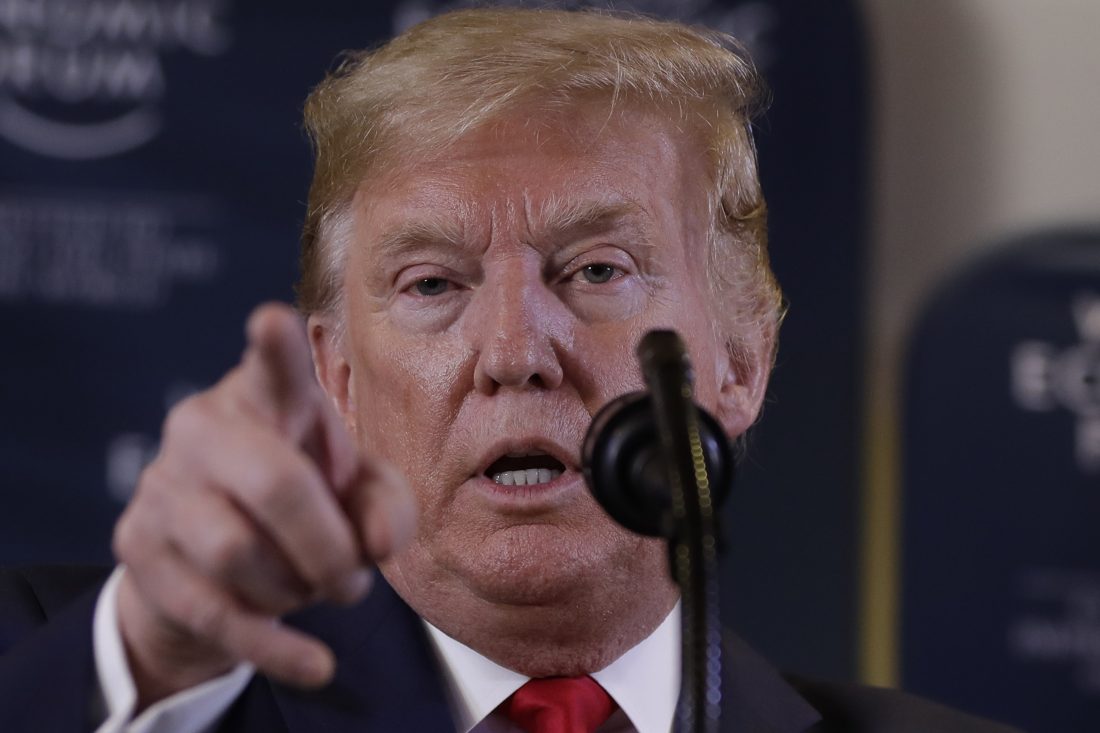 US President Donald Trump speaks during a news conference at the World Economic Forum in Davos, Switzerland, Wednesday, Jan. 22, 2020. Trump's two-day stay in Davos is a test of his ability to balance anger over being impeached with a desire to project leadership on the world stage. (AP Photo/Evan Vucci)

Trump’s lawyers sat by, waiting their turn, as the president blasted the proceedings from afar, threatening jokingly to face off with the Democrats by coming to “sit right in the front row and stare at their corrupt faces.”

The challenge before the House managers is clear. Democrats have 24 hours over three days to prosecute the charges against Trump, trying to win over not just fidgety senators sitting silently in the chamber but an American public, deeply divided over the president and his impeachment in an election year. Rep. Adam Schiff, chairman of the House Intelligence Committee, outlined what the Democrats contend was the president’s “corrupt scheme” to abuse his presidential power and then obstruct Congress’ investigation.

He then called on senators not to be “cynical” about politics, but to draw on the intent of the nation’s Founding Fathers who provided the remedy of impeachment.

“Over the coming days, we will present to you–and to the American people–the extensive evidence collected during the House’s impeachment inquiry into the president’s abuse of power,” said Schiff standing before the Senate. “You will hear their testimony at the same time as the American people. That is, if you will allow it.”

After a dinner break, Schiff returned to the well of the Senate to detail the administration’s hold on military aid to Ukraine. He played several clips of testimony from Ambassador William Taylor, who said the assistance was held back as Trump pushed the country to announce investigations of Democrats.

Most senators sat at their desks throughout, as the rules stipulate, though some stretched their legs, standing behind the desks or against the back wall of the chamber, passing the time. Visitors watched from the galleries, one briefly interrupting in protest.

The proceedings are unfolding at the start of an election year, and there are few signs that Republicans are interested in calling more witnesses or going beyond a fast-track assessment that is likely to bring a quick vote on charges related to Trump’s dealings with Ukraine.

Several GOP senators said Wednesday they’d seen no evidence to support the allegations against Trump even though, just 24 hours earlier, they had rejected subpoenas for witnesses and documents. Democrats, meanwhile, described the evidence against the president as overwhelming but said senators have a duty to gather more.

The trial marks just the third time the Senate has weighed whether an American president should be removed from office. Democrats argue Trump abused his office by asking Ukraine to investigate political rival Joe Biden while withholding crucial military aid, and also obstructed Congress by refusing to turn over documents or allow officials to testify in the House probe. Republicans have defended Trump’s actions and cast the process as a politically motivated effort to weaken the president in the midst of his reelection campaign.

A new poll from The Associated Press-NORC Center for Public Affairs Research shows the public is slightly more likely to say the Senate should convict and remove Trump from office than to say it should not, 45% to 40%. But a sizable percentage, 14%, say they don’t know enough to have an opinion.

One question there’s wide agreement on: Trump should allow top aides to appear as witnesses at the trial. About 7 in 10 said so, including majorities of Republicans and Democrats, according to the poll.

The strategy of more witnesses, though, seems all but settled. Wrangling over rules for the trial stretched past midnight Tuesday night, with Republicans shooting down one-by-one Democratic efforts to get Trump aides including former national security adviser John Bolton, Secretary of State Mike Pompeo, and acting chief of staff Mick Mulvaney, to testify.

Senators are likely to repeat those rejections next week, shutting out any chance of new testimony.

One longshot idea to pair one of Trump’s preferred witnesses — Biden’s son Hunter Biden — with Bolton or another that Democrats want was swiftly rejected.

Trump, who was in Davos, Switzerland, attending a global economic forum, praised his legal team, and suggested he would be open to his advisers testifying, though that seems unlikely. He said here were “national security” concerns that would stand in the way.

After the House prosecutors present their case, the president’s lawyers will follow with another 24 hours over three days. They are expected to take only Sunday off.

“There’s a lot of things I’d like to rebut,” said Trump lawyer Jay Sekulow at the Capitol, “and we will rebut.”

Then there will be 16 hours for senators, who must sit quietly at their desks, no speeches or cellphones, to ask written question, and another four hours for deliberations.

The impeachment trial is set against the backdrop of the 2020 election. All four senators who are Democratic presidential candidates are off the campaign trail, seated as jurors.

Campaigning at stops in Iowa, Joe Biden also rejected having his son testify, or even appearing himself. “I want no part of that,” he said.

“People ask the question, isn’t the president going to be stronger and harder to beat if he survives this? Yes, probably. But Congress has no choice,” he said. Senators must cast their votes and “live with that in history.”

Some Republicans expressed disdain for it all.

The trial began with a setback on Tuesday for Republican Senate leader Mitch McConnell, who backed off his plans to limit each side’s arguments to two days, as the White House had preferred.

But the GOP leader has been skilled at keeping even the most wayward Republicans, those with some concerns about Trump, united in batting back Democratic requests for witnesses and testimony. They ultimately approved a rules package that pushes off a final decision on whether or not to seek additional testimony until late in the trial.

Schumer bemoaned the remaining limitations, saying Wednesday the impeachment trial “begins with a cloud hanging over it, a cloud of unfairness.”

Republicans are eager for a swift trial. Yet Trump’s legal team passed on an opportunity to file a motion to dismiss the case on Wednesday, an acknowledgement that there were not enough Republican votes to support it.

The White House legal team, in its court filings and presentations, has not disputed Trump’s actions. But the lawyers insist the president did nothing wrong.