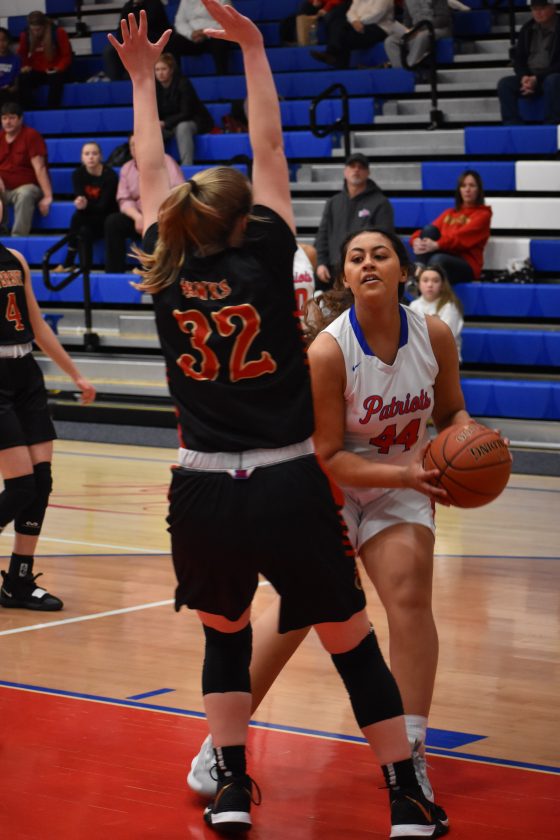 Photo by Josh Strope Wheeling Park’s Bella Abernathy (44) tries to get around the defense of University’s Abbie Coen (32) during Wednesday’s game at The Palace on the Hill.

WHEELING — University had a good plan against Wheeling Park on Wednesday night — throw a blank defense on senior sharpshooter Shanley Woods and make the No. 1-ranked Patriots have to try and beat you another way.

While that sounded like a good plan, and the Hawks did a great job of executing it in the first half, University coach Dave Price was forced to expect the unexpected with Park junior Lindsey Garrison stepping up and making a difference.

Garrison scored a team-high 19 points, including 11 in the first quarter, and the Patriots built a 16-point second quarter bulge before knocking down their free throws at the end and holding on for a 51-44 victory over the Hawks in a battle of state-ranked big school squads at the Palace on the Hill.

“It got close in the end, but we still handled things better than we did when we played them in Morgantown,” Wheeling Park coach Ryan Young said. “We had a 10-point lead going to the fourth quarter down there and ended up winning by one.”

It didn’t appear that was going to be an issue Wednesday as University (8-5), ranked No. 8 in the latest state poll, was a mere 1 of 13 from the floor in the opening quarter while Garrison was 4 of 6 with a trio of 3-pointers.

Leading 4-2 midway through the first Woods picked up her second foul at 4:12 which opened the door for Garrison to take charge. The junior buried three consecutive long bombs to push the margin to 13-2 before the Hawks’ Ashten Boggs slowed the bleeding with the game’s first two-point field goal at 1:28.

A Garrison basket at the 34-second mark closed the scoring with Wheeling Park owning a 15-4 edge after one.

Junior Bella Abernathy hit a basket out of the gate in the second with Garrison nailing her fourth 3-pointer of the half at 6:45 and the Patriots had what turned out to be their biggest lead of the night at 20-4. It was 24-11 late in the half before Boggs’ conventional three-point play cut the margin to 24-14 at the break.

University came back out on the floor in the third quarter and got hot early with a Lauren Dean 3-pointer, a Boggs hoop off a steal and a Mallory Napolillo put-back at 6:48 that had the visitors within three at 24-21.

A 10-2 run quieted the University side, paced by five points from Woods who had 14 of her 17 points in the second half, as the hosts were back out to a 34-23 edge. The Hawks, however, led by three Boggs hoops, including one off a steal, tallied the final eight points of the third to pull to within 34-31 with eight minutes to play.

“As a coach I wish I could find a way to get them to come out and play in first quarter like they do in the third,” Price said. “Our adjustments always seem to turn into hard work and good basketball after the half.”

Trailing 41-35, the visitors got another basket from Boggs, who shared game honors of 19 with Garrison, and a putback from Napolillo to trim the deficit to two at 41-39 with 4:20 showing.

The Patriots managed to push the lead back to four at 45-41 before freshman Eden Gibson’s only basket of the night, a long 3, brought University to within one, the closest it had been since the opening minutes of the game. However, while the Hawks twice missed opportunities to tie or take the lead Park scored the game’s final six points on a perfect showing from the line to close it out.

“They definitely blanketed Shanley (Woods) early on but its nice when you can have a kid like Lindsey (Garrison) step up and do what she did for us (Wednesday),” Young said. “Our defense was very good, but no lead is comfortable against a gritty, well-coached team like University.

“Rebounding helped them stay in the game. They rebound the ball very well and if they don’t get it on the first try a lot of times they are going to score on the second or third.

“We played good defense, Lindsey picked us up offensively in the first half and we made free throws at the end. We are a pretty good free throw shooting team this year and I feel comfortable in tight games down the stretch.”

Wheeling Park turned the ball over nine times, including none in the first quarter and one in the third, while University committed 14 miscues. The Hawks grabbed a 41-32 edge off the glass with Napolillo completing the double-double with 12 points and 10 rebounds while Boggs added 10 rebounds for a double-double as well. Abernathy finished with 11 points for the Patriots while Kieran Johnnson had a team-high eight caroms.

“We did a good job on Shanley Woods early on, but I can tell you that what Garrison did was unexpected,” Price said. “It was an oversight and not following her put us in a hole.

“But the kids kept fighting and we had it down to a one-possession game a couple times in the fourth quarter. I though we played a good, but not great game.

“We talked about rebounding at the half because I felt like we left that off our list of things to do in the first half, but we were a lot better at it in the second half.”