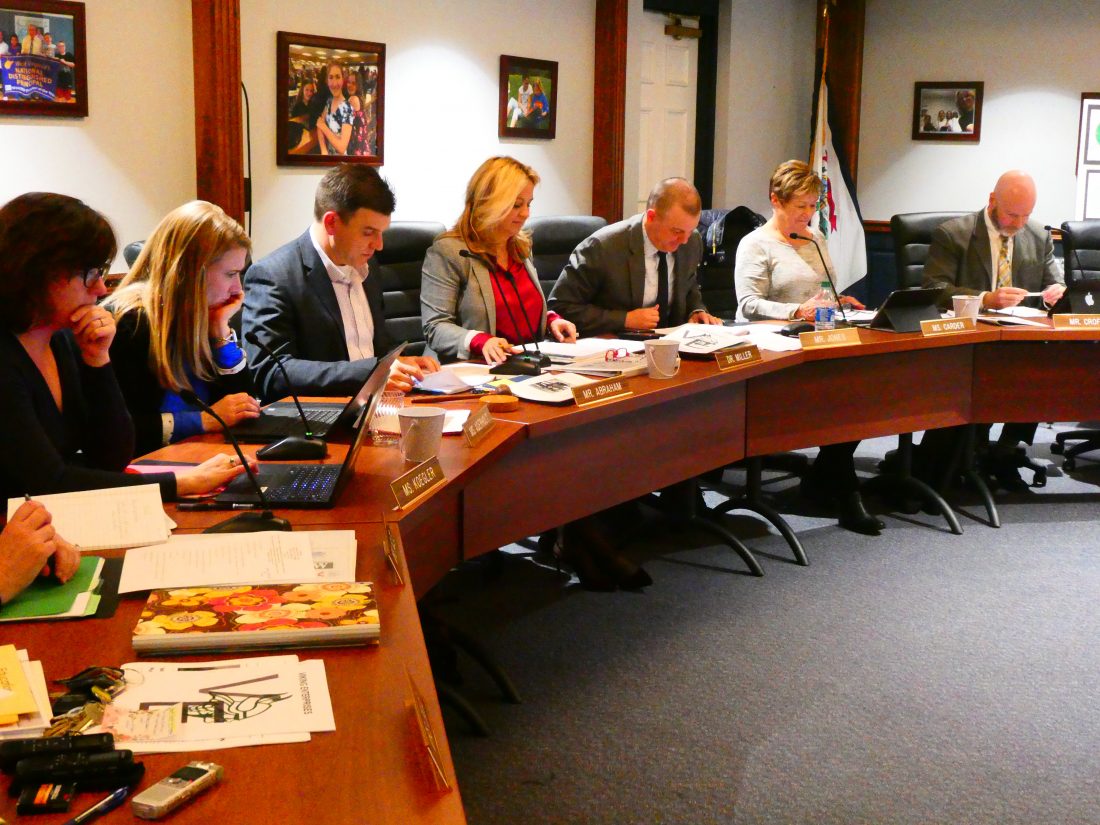 Officials with Ohio County Schools sit down for a board of education meeting Monday night. Pictured from left are board members Sarah Koegler and Molly Aderholt, board president Zach Abraham, Superintendent Kim Miller, Assistant Superintendent Rick Jones, and board members Christine Carder and David Croft.

A letter from a swim team parent in the Sunday News-Register criticized the school district’s lack of action in resolving a problem with the pool.

The pool has been closed since before the start of the swim team’s season as school officials seek to learn why the motors on three new heaters installed quickly burned up, making the pool unusable. Meets and practices were moved to the pool at Wheeling University.

“The kids have only missed one swim meet, and the practices have been re-arranged,” she said. “It is very disheartening our kids had to have other opportunities provided for them. However, we wanted the board of education to know we have not ignored anything.”

The school district still is trying to work through the problem and find an outside contractor familiar with large pools, Miller said.

In the interim, a fourth auxiliary heater has been purchased and is expected to be delivered later this month.

But Jones said the motors installed have not been the problem.

“Something is making the motor burn up and click off,” he said. “At first we thought it was an electrical issue. … Erb Electric is monitoring the amount of electric coming in to the building.”

Reducing the electrical flow helped the motor to run longer, but this kept the heater from properly warming the pool, he said.

Installation of the heater will take a day, but there is no point installing it until other issues have been resolves, according to Jones.

Much of the meeting centered on the Warwood School. Principal Joey Subasic and Assistant Principal Jim Rowing updated the board on the school’s “Viking Enterprises” initiative, and how middle school students are getting real workplace experience at the school.

The last period of each day, students at the school go to “jobs.” Students with education jobs tutor elementary students, while others produce news stories for the “Viking News Network” or school newspaper.

Some design logos, or are involved with marketing and advertising. Others play music, build wooden items intended for sale or work on the school’s website.