2020 Legislative session to begin with focus on development 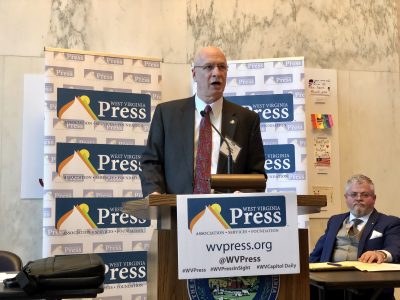 CHARLESTON — Going into the 2020 legislative session starting next week, members of the West Virginia Legislature and the top official at the Department of Commerce told media Friday that work continues on improving economic development in the state.

Members of the state’s news outlets gathered Friday for the West Virginia Press Association’s annual Legislative Lookahead at the Cultural Center in Charleston. Friday morning’s panels focused on economic development, the upcoming budget for fiscal year 2021, and tax reform by removing the business and inventory tax.

Senate Finance Committee Chairman Craig Blair, R-Berkeley, said that repealing the business and inventory tax is a high priority for the Legislature in the upcoming legislative session starting Wednesday.

“Over the years in the last two decades there’s been a multitude of people who have tried to get this done,” Blair said. “That has not happened yet. We’ve only nibbled around.”

Lawmakers believe that removing the tax would help spur development of existing businesses and help bring in new industries in the state rely on manufacturing equipment.

But the tax, built directly into the state constitution, helps fund county governments and school systems. According to Blair, removing the tax would cost an estimated $100 million.

Removing the tax would require the House and Senate passing a joint resolution with two-thirds of both chambers approving, then voters would have to approve a constitutional amendment in a special election.

Republican legislative leaders are calling for a four-year phase out of the business and inventory tax, decreasing by $25 million per year. Senate President Mitch Carmichael, R-Jackson, believes that the state can backfill the loss in tax revenue with funding from the general revenue budget.

“We want to focus on eliminating the barriers that have stopped job creation in our state, things like the personal property tax on business and manufacturing machinery and equipment,” Carmichael said. “People have been talking about getting rid of this tax. It’s been identified by renowned economists. It’s been studied by governors from both parties. It always comes back that this is the number one job killing tax in the state. And yet it still remains 30 to 40 years after the studies have been conducted.”

During an earlier panel discussion on ways to improve economic development in the state, Sen. Eric Tarr, R-Putnam, said the business and inventory tax was a major hindrance to new investment in the state.

Democratic lawmakers on Friday’s panels also see the business and inventory tax being a major issue during the session. While not against the phase out in principle, they were concerned about replacing the lost tax revenue for counties and school systems.

“The challenge is going to be … this inventory tax thing, because that requires a supermajority,” said Del. Mick Bates, D-Raleigh. “It’s a constitutional amendment and you can’t get through the House without democratic support.”

“I think that there are certainly several Democrats, myself included, who always looked at that tax as a hindrance to business investment,” said State Sen. Corey Palumbo, D-Kanawha. “The question’s always been we can’t take that money out of the county’s hands. The counties in West Virginia struggle because largely our real estate taxes are so low, much lower than most states around the country. It’s not going to be politically feasible to shift that tax burden from the manufacturing companies to people on their residential taxes. There’s got to be some way to keep the counties whole.”

All the panelists on the budget and tax reform panel believe that the upcoming general revenue budget for fiscal year 2021 will be flat. Current year-to-date tax revenue number for the first half of fiscal year 2020 have stayed approximately 2 percent below revenue estimates.

“I’m not stressed by that number at all,” Blair said. “I believe the second half is going to be better.”

Presenters on the economic development panel expect additional legislation to help spur broadband infrastructure growth across the state, as well as ways to encourage the growth of a tech industry in West Virginia.

“I can tell you if the tech focus had been started five years ago, we wouldn’t have been having broadband issues this morning,” said Del. Moore Capito, R-Kanawha. “We’re going to really focus on the issues that many young West Virginians are excited about, and that has a lot to do with tech.”

Ed Gaunch, secretary of the Department of Commerce, said the word is getting out about West Virginia thanks to addition funding for tourism promotions. Gaunch said the state is looking to states such as Tennessee, Texas, and Utah for inspiration.

“We would love to copy some of the things they’re doing,” Gaunch said. “We understand we don’t have an ad budget like the state of New York, so we’re attacking our issues in various other ways. I think what we’ve been more in terms of getting our house in order, internally focused, getting our tax structures right, getting our business climate right, and frankly, we’re starting to see the benefits.”