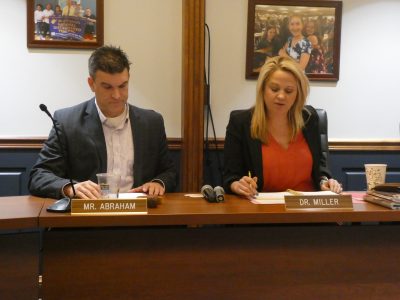 That was the unanimous decision issued by the Ohio County Board of Education after a lengthy closed-door meeting Tuesday.

Minch has been suspended since Jan. 21 for recording and sharing the portion of a surveillance video showing a student falling from a sliding board at the school, then receiving no help from school employees. Her laughter could be heard in the background on the video.

Minch appeared for an employee hearing before the Ohio County Board of Education Tuesday morning. Following the two hour hearing that was closed to the public, the board met in private for an additional hour to determine her punishment.

Superintendent Kim Miller recommended that Minch be suspended without pay from Jan. 21 through Tuesday, but then return to the job on Monday. Upon her return, Minch will be placed on a corrective action plan in accordance with West Virginia Department of Education policy, Miller said.

The board released a joint statement Tuesday afternoon explaining its decision to reinstate Minch.

“The Board does not condone the actions of Mrs. Minch and believes they were wholly inappropriate. However, the Board and Dr. Miller have decided to provide Mrs. Minch with the chance to not only regain our trust, but the trust of each parent, student, and staff member of Woodsdale, as well as that of the community as a whole,” the board stated.

“This was a very difficult decision for the Board, but we believe that based on all the evidence presented, the action taken today is in the best interest of our school system,” the statement read.

“The Board took this process very seriously, considering all the facts provided to it and taking into account the notoriety caused by this situation.”

About six employees from Woodsdale Elementary School also were present at the board office to show support for Minch as she entered the room. Rebecca Ihlenfeld, countywide speech/language pathologist, gave Minch a hug while the others gave her words of encouragement.

Minch was not present when board members announced she would return as principal. It was said she had departed through a fire exit from the board room following her hearing.

Prior to the video taping incident, Minch previously was lauded for spearheading efforts to raise hundreds of thousands of dollars to improve the playground at Woodsdale Elementary School.