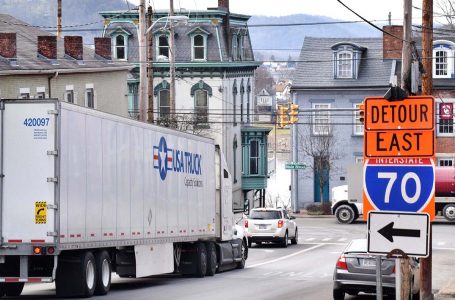 A tractor-trailer travels Monday through North Wheeling using the local detour due to the closure of Interstate 70 near the Wheeling Tunnel.

WHEELING — A group of North Wheeling residents are expressing safety concerns about the significant increase in large tractor trailers and other big rigs traveling through North Wheeling as a result of the recent I-70 Bridges Project detours.

Several residents say they believe the increase in the number of trucks traveling through the neighborhood from 7th Street is not just trucks making local deliveries, but mostly truckers who are not following the suggested Interstate 470 “through” detour route suggested by the West Virginia Division of Highways.

Angie and Chad Hill, who reside at 701 Main St. in North Wheeling with their two children, said they have safety concerns for the entire neighborhood and are worried that it may just be a matter of time before a large rig crashes through a house in the neighborhood.

Their home is situated across the street from the bottom of 7th Street.

“Our concerns are the semi-trucks particularly,” Angie Hill explained. “We realize we are on a traffic detour and we’re not asking to change the whole I-70 detour, we just want officials to help encourage the semis to detour via I-470. This detour is not appropriate for semi-trucks,” she added, while pointing out that larger trucks many times have difficulty in negotiating the sharp turns in that area and come just feet away from the front of their property.

“I’m praying nothing happens,” she said.

She said she is concerned the trucks may lose their brakes or travel down the hill too fast and crash into a house. It’s also a huge concern for pedestrians, she added.

The Hills pointed out that people have been struck by vehicles in North Wheeling prior to the detour being implemented and now the heavy traffic flow makes it even more dangerous.

“What if there is an accident with a semi out in front of our house and what if there was a flammable substance in the truck and a big fire erupted?” she said.

The Hills explained that while safety concerns are paramount — the increase in truck traffic has also added significant noise to the neighborhood. They said the truckers downshifting, the air brakes and loud horns at times is very unsettling and often wakes them during the night-time hours. Chad Hill said he would like to see signage that explains motorists are entering a “residential neighborhood.”

“I would wish people in general, including semi-trucks, would obey the speed limit,” Chad explained.

The Hills and members of Victorian Old Town Association collectively believe DOH should post better signage well ahead of Two-Mile Hill in hopes truckers traveling past Wheeling will not miss the I-470 detour at the split in Elm Grove.

Another option residents have suggested to DOH officials is to consider changing the local detour for the large tractor-trailers only — where they would have to travel along Martin Luther King Jr. Boulevard from the top of Wheeling Hill on down to Chapline Street and make two right turns that would take them on Market Street where they could continue on to access I-70 West.

Old Town members said they’re quite certain the large numbers of big trucks traveling the local detour are not just trucks making local deliveries. The Hills said there are too many coming though the neighborhood on a regular basis, especially evening and night hours.

North Wheeling resident Maria McKelvey said her concerns are mainly about the safety of the neighborhood.

“For some reason, they’re (truckers) not going on 470. These are two really treacherous turns for a tractor trailer. … It’s very dangerous,” McKelvey explained. “If you have a tractor-trailer where the load shifts, you’ve got a trailer flipped over. There is absolutely no room for error,” she said.

McKelvey said she contacted a DOH official on their hotline and he told her they have posted signs on the way toward Wheeling.

“But something is not occurring, where they’re still coming this way instead of going over 470,” McKelvey commented. “Thank God we haven’t had bad winter weather. … They’re going to crush somebody at some point,” she added.

Wheeling Island Resident Ben Seidler, who is a board member of the Victorian Old Town Association, a local group who organizes events and activities along North Main and advocate for ongoing improvements to the streetscape in the neighborhood, said members of the association are expressing increasing frustration with the heavy truck traffic traveling through the neighborhood.

“All of this traffic going through the residential area just wreaks havoc on the neighborhood. It’s not really the most productive route,” Seidler commented. “We have a gap where the truckers are not really getting the message on I-70. … We have sent some emails (to the DOH) and I have not got a response yet,” he added.

Efforts to reach officials with the Division of Highways were unsuccessful Monday due to the federal holiday.