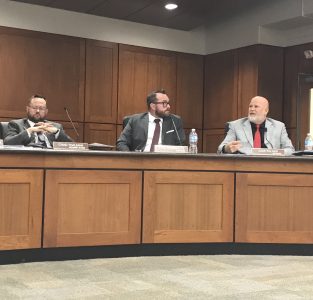 WHEELING — City officials on Tuesday night said that great strides are being made with new strategies to clean up unsightly properties throughout neighborhoods across town.

Councilman Dave Palmer said council should continue an effort that was initiated last year with great success, giving property owners in violation of city codes incentive to address the problem.

In May of last year, council passed an ordinance to change the way the city handles these kinds of property maintenance issues. Officials said the city focused on this new approach after determining the enforcement process for these violations took too long and led to too many repeat offenders. The measure was intended to streamline the process of issuing citations for property maintenance violations such as having overgrown weeds or unlicensed motor vehicles and garbage on private property.

“When it took effect, we sent letters out to property owners who were in violation, because we didn’t want the code enforcement officer writing citations on the street — we felt that would be dangerous,” Palmer said.

“The letter stated that they were in violation and there was an immediate fine, but the fine could be waived if they took care of the problem on time.”

In 2019, approximately 300 citations were issued in the city for high weeds and sanitation violations, as well as violations for unlicensed and inoperable motor vehicles. After letters were sent, about 85 to 90 percent of those violations were corrected without court action, Palmer said. The other 10 to 15 percent of violators either paid the fine or complied.

Of the offenders who did not comply — about 5 percent of them, officials said — were taken to court, but most of those individuals who appeared in court ended up complying without being fined. Capias warrants were issued for the few offenders who failed to appear.

“The citation process has been very helpful for property maintenance,” he said. “The possible $100 fine with the citation got residents to take action. One of the big successes that came about because of this was the fact that there were approximately 75 vehicles that were either removed or were properly licensed. So we’re talking about a lot of abandoned vehicles and junked vehicles. It’s really a win to get those moved off of these properties.

Palmer worked on this effort with the city’s economic and community development staff, as well as code enforcement officer Tom Wilson. While officials said they were pleased with the progress of the new approach to addressing property maintenance violations, there is still more that needs to be done.

“We still have problems,” Palmer said. “Although we’ve had success, I really feel that city council and our staff will have to continue to work on loopholes that allow an offender to drag out issues instead of correcting them in a timely manner. This is not just a city issue, I think this is a statewide if not a nationwide issue. I think we need to build on what we started here to keep going forward. We don’t have all the answers, I think we need some more suggestions as to what we can do to remedy some of these problems.”

Despite being encouraged by progress being made, council members said their hands when trying to enforce the most chronic property maintenance violators, and in some cases, the process of addressing these issues could drag on for years without resolution.

In other action Tuesday, council unanimously approved an ordinance authorizing the expenditure of nearly $2 million for ongoing sewer separation work to take place near WesBanco Arena, as well as sites along Market Street downtown, in South Wheeling and near the Greenwood Cemetery.

Council members noted that this is a another $2 million step forward in the overall project that will bring $250 million worth of improvements to the city by separating sanitary sewer and storm sewer systems throughout the city.

* Members of the Wheeling Finance Committee discussed a proposal to offer a tax rebate program for property owners who invest more than $25,000 in improvements or renovations. Single-family rehabilitation projects in excess of $25,000, for apartment building renovations $15,000 per unit or commercial property investing $50,000 and up investment.

“The goal is to encourage investment that otherwise may not happen and to provide at least a little bit of a tax break to those folks who are interested in making that investment, particularly from a residential perspective,” said City Manager Robert Herron.

The proposal is still in the preliminary phases of development, officials noted.

* Council also approved a recommendation to appoint Heidi Kossuth to the Wheeling Housing Authority for a five-year term ending Dec. 31, 2024.

* Jay Frey, chairman of the Wheeling 250 committee, presented an official report at the conclusion of the city’s many event celebrating Wheeling’s 250th year in 2019.

“A Wheeling 250 Archive is being established at the Ohio County Public Library,” Frey said. “I think we’ll have good records that will memorialize the Wheeling 250 for future generations and possibly offer a reference for our successors when it comes time for them to mark the 300th anniversary of Wheeling’s founding in 2069.”