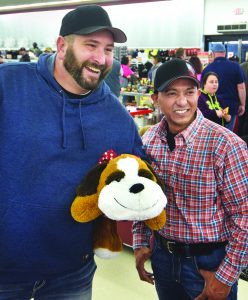 ST. CLAIRSVILLE — The local Rig Dogs organization is using its social media network and influence to help further the goals and missions of four local non-profit animal rescues, according to the group’s co-founders Jarrod Miller and Chip Lockwood.

Several hundred people turned out Saturday afternoon for a “meet n’ greet” event at the Oil and Gas Safety Supply store in St. Clairsville not only to meet Miller and Lockwood, but to support the animal rescues by signing up for various raffles, including the large Rig Dogs Sportsman Bash raffle, scheduled for March 14 at the old Sears building at the Ohio Valley Mall.

Dozens of people not only signed up for various gun raffles, they also participated in various games and fun activities like corn toss and Plinko. Snacks and refreshments were also provided.

Miller and Lockwood said they started the organization, which is a group of individuals strongly associated with the oil and gas industry in the Ohio Valley, through a Facebook page they began in November as a way to support positive community causes.

Both Miller and Lockwood have backgrounds of working in the oil and gas industry.

Miller said Rig Dogs isn’t solely about helping animal shelters, he said, “It is about seeing a need and filling it.” They are hopeful that Rig Dogs will “inspire” others to help with positive community causes. He said they currently have 8,900 followers on Facebook.

“We’re helping people raise awareness to see others around us,” Miller explained.

Lockwood said they have a great social media presence and are just trying to start a movement of kindness in the Ohio Valley and want to get the word out to as many people as possible.

“We will eventually move into other fundraisers, other non-profits, this is just the first one,” Lockwood commented. “We just picked these animal rescues to be a part of this (movement), because we love what they are doing.”

He said the greatest part about the organization is seeing a need and giving back to the community. He said Rig Dogs’ goal is to see them flourish as animal rescues.

The four local animal rescues they are raisng funds for include: Road Home Animal Project in St. Clairsville, Crossed Paws Animal Shelter in Woodsfield, Harrison County Dog Pound Volunteers in Cadiz, and Forever Loved Animal Rescue Construction Fund in Bergholz. The rescues all work with a volunteer roster and donations from the community.

Tricia Kyer of St. Clairsville, who was participating in various activities with other members of the Harrison County Dog Pound Volunteers, said she became aware of the Rig Dogs organization recently, adding the event was for a great cause.

“I love what they’re working for,” she commented.

For more information about the Rig Dogs Sportsman Bash $50 a ticket raffle, scheduled for 10 a.m. March 14, a page can be found on Facebook or you can visit their website at Rig-dogs.com. More than 69 different guns and more than $30,000 in various cash prizes will be raffled during The Sportsman Bash.