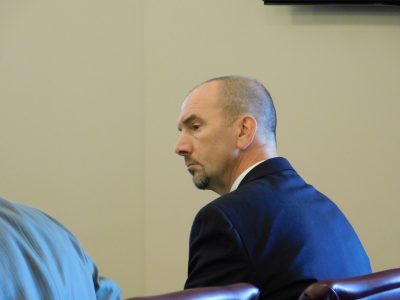 Bridgeport Mayor David W. Smith pleads innocent Thursday to charges including theft in office. His trial was set for March 31.

ST. CLAIRSVILLE — Bridgeport Mayor David W. Smith pleaded innocent Thursday to multiple charges, including one count of theft in office of more than $20,000.

Smith, 50, of 205 Jacquette St., Bridgeport was arraigned before Belmont County Common Pleas Judge John Vavra on Thursday. Smith faces charges of tampering with records and theft in office, both felonies of the third degree, and two counts of conflict of interest, both misdemeanors of the first degree. The alleged offenses go back as far as 2016.

Smith took office as mayor in November 2015. Between June 2016 and November 2019, while serving in the Mayor’s Court, Smith allegedly removed both cash payments and corresponding traffic tickets that were waiting to be processed for his personal gain. It is believed that the resulting losses to the village are greater than $20,000.

The misdemeanor charges are related to Smith’s alleged use of an employee of the village to handle his personal errands, including child care and banking, while on village time.

Vavra said Smith was served a copy of the indictment on Feb. 9.

“If you are convicted, it involves a permanent disqualification from ever … serving in a position of trust,” Vavra told Smith on Thursday.

Vavra also issued a no-contact order between Smith and the former Bridgeport employee involved in the allegations.

“Mr. Smith has been served with a notice from the state that motion was filed with the Supreme Court of Ohio instituting proceedings for a suspension pending the indictment of this case,” Special Prosecutor Leigh Bayer of the Ohio Auditor’s Office said.

She said she did not know when a decision on that matter would be reached. “It takes usually about two months for the entire procedure to go through.”

Stickles asked Vavra to consider a recognizance bond for Smith. Stickles said Smith is a lifelong area resident with no criminal history, and that he is cooperating with the court. Stickles said while Smith is currently employed as a postal worker, he could potentially be put on leave of absence.

“Any form of monetary bond would be a hardship,” Stickles said.

In answer to a question from Vavra, Stickles said Smith has no passport.

Vavra imposed a cash or surety bond, meaning that Smith has the option to post the full amount or hire a bonding agent. Otherwise he was ordered to report to the Belmont County Jail by 9 a.m. today.

Movies Without A Mask