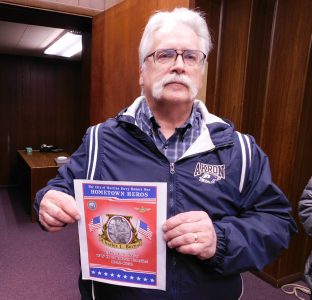 Martins Ferry Councilman Tom Burns holds a possible banner design for the city’s Hometown Heroes project, honoring veterans and possibly other community members with banners around the city. The typo on “heroes” will be corrected in the final product. The banners should be up by July 4.

MARTINS FERRY — Banners honoring veterans and other community members are expected to be lining the Purple City’s streets by July 4.

In November, Councilman Tom Burns began forming a committee to research a veteran banner program for the city. He said the banners could be purchased by residents, businesses or organizations in the city. He expects the price to be about $80 each.

Last week, Mayor John Davies said there was great potential in the plan and more than enough room in the city.

“With our veterans, we have all these flag poles out here and light poles we can put flags on. I agree with Mr. Burns. I think we should move forward,” he said. “We’re going to make it a group, team effort.”

Davies said the city is also looking into expanding the recognition to include prominent and accomplished residents during various time periods.

“I think we need to start showing our appreciation for our people in town, be it football players when football season’s coming up … your business people, have a business month,” he said.

“We’re going to give tribute to our veterans here in town,” Burns said.

He displayed a prototype at his house Nov. 11. That banner featured his father.

“It cost me $80,” Burns said, adding he is looking at different possibilities. “I’ve had a couple people after I put mine up on Nov. 11 say they may not be able to afford the whole thing. We could have one person buy one side and the other person the other side.”

Burns is also considering various banner sizes and the possibility of placing two people on one side.

“I’m making them big enough, and I’ll make extensions on those poles,” he said. “I took different ideas from different companies and put them together. … I called it a Hometown Heroes project.”

Burns said the veterans banners would include the years a veteran was in service and any conflicts in which they were involved. He also said organizations such as the Lions Club, the Elks and Project Forward have offered support. He also is looking at online advertising possibilities to encourage out-of-towners to participate.

Burns said he envisions the banners only being displayed for limited time periods.

“It’s only for certain holidays,” he said. “I didn’t want to just do it and leave it up. They’re going to get torn up. I didn’t want there to be real bad weather and have the wind just rip them to pieces.”

“We wanted to do something different than has been done in the past,” Davies said, adding that there could be designated periods to display banners for veterans, athletes, business people and Hall of Honor members. “There’s so many people we could honor. These are our people. These are the people who built this town.”

He and Burns said there are about 50-75 poles in the city that would be appropriate for the displays. Ultimate Signs & Graphics will make the banners.

Burns said there should be further announcements coming as the project unfolds.

“By the Fourth of July was my timeframe to really get them up,” he said.